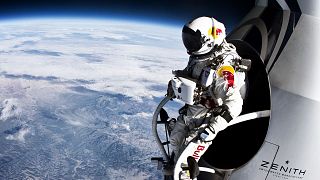 10 years ago on 14 October 2012, Felix Baumgartner, an Austrian parachutist, captivated the world when he jumped from a capsule 40km above the New Mexico desert, on the very edge of space.

In total, the remarkable feat broke three world records – the highest free fall, the highest manned balloon flight and he became the first man to break the speed of sound in free fall (he reached 1361.5 kmh!).

The YouTube live stream of the event also reached more than 8 million concurrent viewers, the highest amount in the website's history.

To celebrate the 10th year anniversary of the jump Baumgartner and Red Bull have released Space Jump, a new 40 minute documentary showing never-before-seen images and perspectives of the skydive.

We recently caught up with the Austrian adventurer to discuss the new documentary and reflect on the legacy of his death-defying plunge.

How does it feel looking back on Red Bull Stratos, 10 years on?

"In retrospect I have a lot of good memories of it, even if it was not always fun to work on the programme. Especially when I found out that I was getting claustrophobic inside the space suit. That moment was a real showstopper and I had to find a solution."

"I had never worked on a project like it, so I learnt how to become a team player. I was not used to being around so many people because as a base jumper it's just you, your parachute and your decision making. But once you sign up to a project like Red Bull Stratos there's just so many people in the team."

"After working on a project of that size I don't really fear any other project, no matter the size."

I'm meeting a lot of fans. People that I didn't see while I was doing it. And a lot of them are telling me that this was their personal moon landing

How has your life changed since the jump?

"It didn't really change my life - I still have the same friends, I'm still a humble person, all the way down to Earth."

"It just opened up a lot of doors. I was travelling around the world. I did a lot of TV shows, I met Tom Cruise, Gerard Butler and I had a really good conversation with James Cameron, the guy who went down into the Mariana Trench in 2012 in a submarine called Deep Sea Challenger. So I met a lot of very interesting people."

"Still to this day I'm meeting a lot of fans. People that I didn't see while I was doing it. And a lot of them are telling me that this was their personal moon landing. I'm not saying my jump is comparable with the moon landing, that's a much bigger accomplishment. But from an emotional standpoint it is comparable."

Do you think the feat will ever be accomplished again?

"There's always somebody out there who will break your record, but I'm happy with this because I was the first one. And as we remember from history, nobody ever remembers the second one."

When did you first get into skydiving?

"I was always fascinated in skydiving ever since I was a little kid. I remember spending a lot of time on top of trees, always seeing the world from above, that birds eye view."

"As soon as I turned 16 I went to the local skydiving club. They taught me how to skydive and that's where everything started. Then a couple of years later I joined the Austrian military as a paratrooper. Then later on I started to BASE jump. I started to travel around the world and BASE jump off very well known landmarks."

"I BASE-jumped off the highest building in the world, the Petronas Towers in Kuala Lumpur, I BASE-jumped off the Jesus statue in Rio de Janeiro, so a lot of very famous landmarks. And then in 2005 I signed up for Red Bull Stratos, which was the most complicated project I've done so far."

What is your advice for someone seeking to accomplish their own dreams?

"I think it's very important that you surround yourself with the right people, you have to listen learn and you need a lot of discipline. Don't look left and right just go for it. As I always say big dreamers always win."

Are you still skydiving today?

"I'm a commercial pilot now and Red Bull also taught me how to fly aerobatics in a helicopter two years ago, so I'm now really busy with air shows all around the world."

Tell us about your new documentary with Red Bull, Space Jump

"The film has a lot of insight and a lot of things that we've never spoken about before. So it's definitely worth the watch, I was very happy when I saw it for the first time. It was very emotional and brought back a lot of good memories."

What's next for you?

"I've always had the dream to go to the moon because I still think to this day that it's the biggest accomplishment, to set foot on another planet. And so far there's only been 12 people on the moon. So I would take any chance to go the moon, that's something I'd really love to do."

Felix Baumgartner: The man who fell to Earth

Felix Baumgartner: life on the edge