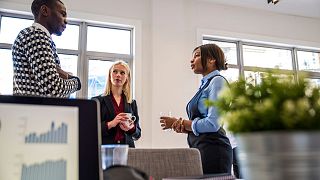 Conversations about the weather around the office's water cooler might be more important than you think.   -   Copyright  Canva
By Giulia Carbonaro  •  Updated: 05/09/2022

Daniel Sgroi, a professor of behavioural economics at Warwick University, UK, used to hate small talk. Like many of us, he used to find small pleasantries exchanged between colleagues along the corridors of whatever office building, university or institution annoying - but then he undertook research that completely changed his mind about having conversations.

Together with Dr Neha Bose, a PhD candidate in behavioural economics at Warwick University, Sgroi set about finding out the impact small talk has on people working together.

To do so, the two researchers conducted an experiment among 338 participants who had never met before in person.

Each participant was asked to complete a personality and IQ test, and then they were divided into two groups. In each group, people were paired up and either did not interact at all or engage in four minutes of small talk - via text.

“They don't get to see each other, this was important,” Sgroi told Euronews Culture. “So they can't try and work out the gender or the nationality. We don't want any of that to play a role. They just get to talk, basically texting each other for about four minutes before they interact with each other in a workplace environment,” he explained.

“People start to build mental models of the person they're talking with even after only four minutes,” Sgroi said. “You start to get an idea of what the person is like, their personality. And then you can use that to try and guess how they're going to behave when you work with them.”

"What our research suggests is that such brief chats could shape how you work together in the future," Bose told Euronews Culture. "So even after a very brief exchange lasting less than four minutes, people start to build a sense of others' personalities, whether they're extroverted or introverted, do they seem bold or shy, warm or cold."

If you're curious about how you are perceived by your own colleagues, know that, according to Sgroi, "the more detail you give, the more you speak, the faster you speak, the more extrovert you seem to be."

But what the two researchers also found was that people projected a bit of their personality on the other person. "If I'm an extroverted person, for example, I'll tend to foster a positive social environment around me, which automatically makes me find people around me extroverted as well," Bose said.

Those engaging in small talk had not only learned to know each other better than those who had not, Sgroi and Bose found: they also worked better together in the simulated workplace the two researchers had created.

The two groups of participants were put in front of two money-based strategy games, where they were asked to guess whether their partner will behave selfishly or cooperatively. In one game –called the public goods game – players were given a £20 (€23) note and they were asked to contribute to a communal pot.

These are common games used in behavioural economics, where players often use “cheap talk”: similarly to bluffing in poker, cheap talk is basically lying to make the other person behave the way you want them to.

In a game like the public goods game, where players can either cooperate or decide to free-ride on the effort of their partner (likely making them feel foolish and deeply betrayed), the idea that players have of each other and the way they will behave is of fundamental importance.

In Sgroi and Bose’s study, small talk proved to make quite a difference in the players' approach to the game: the pairs that had chit-chatted to each other contributed 30 per cent more money in their communal pot, showing that they were more cooperative than pairs that had not engaged in pleasantries.

“A lot of managers tend to think of fraternising between colleagues, when they talk to each other about social things, as draining in terms of productivity. Actually, it's not,” Sgroi said.

“It produces a sort of cohesion and an ability to cooperate that you don't readily get in other ways. So it actually has a beneficial purpose.”

Sgroi said that we should all be making more of an effort when it comes to small talk. “If someone asks you ‘How are you?’ you could ignore them or you could just say, ‘Fine’, but the more you say, the more information you reveal about your personality, the better it will be in terms of their ability to understand you. And that has to be a benefit if you're in a team-based working environment,” he said.

When it comes to the object of conversation for small talk, Sgroi said the research was quite surprising: people didn't just talk about the weather, as people in Britain are mocked to do.

"Someone talked about their goldfish and all sorts of crazy things. The trick is, that it's not really about a specific expression, it's not really what you talk about. The important thing is to just talk about something that means something to you," Sgroi adds. "It will reveal more about yourself."

"They may not fundamentally care about the detail, but it will help them to get to know you better." Just beware of TMI - you're still in a workplace environment after all.