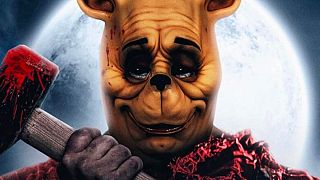 Entering the public domain can bring about some strange, childhood-corrupting stuff.

On 1 January 2022, A.A. Milne’s original Winnie The Pooh stories entered the public domain. The lapsed copyright means that while Disney do retain the rights to the ursin’s red-shirted look, the House of Mouse no longer enjoys an exclusive right to Milne’s work.

Now, any enterprising soul can cook up all manner of shenanigans and transform a timeless story of childhood innocence into whatever their dark heart desires.

But nothing could have prepared anyone for the new iteration of everyone’s favourite honey-loving bear. Indeed, the now 95-year-old character Winnie the Pooh and his trusty sidekick Piglet are going feral in the upcoming horror film, Winnie the Pooh: Blood and Honey.

Give a medal to whoever dreamt up that title.

The trailer just dropped and shows the inhabitants of the Hundred Acre Wood giving Michael Myers and Jason Vorhees a run for their money.

We learn that Pooh and Piglet have turned “wild” after Christopher Robin abandoned them years earlier. When Robin returns all grown up, he discovers that his two childhood friends had to fend for themselves in the wild and have matured into hulking agents of chaos with a penchant for murder.

And as the promotional material kindly informs us, “This ain’t no bedtime story.”

Check out the trailer below:

Horror repurposing of beloved children’s stories is far from a new phenomenon, so no one can be completely surprised.

Fairytales have always featured disturbing content – the original Brothers Grimm take on Cinderella featured amputations with the two step-sisters severing parts of their feet in order to fit into the slipper (a deception that ended with their eyes pecked out by doves); Hans Christian Andersen’s The Little Mermaid saw the central character choosing to become sea foam when she doesn’t gain the prince’s love; Charles Perrault’s Sleeping Beauty saw the prince assaulting the princess while she sleeps and scarpering as soon as he impregnated her with twins.

That is to say that horror and fairytales have always been perfect bedfellows, and filmmakers know this all too well.

Only in the last few years, we got the fantastic Polish reimagining of The Little Mermaid with The Lure (2015), the Suspiria remake from Luca Guadagnino (2018), which can be said to be a witchy take on Snow White, the disturbing Hansel and Gretel (2020), and The Curse of Humpty Dumpty (2021), featuring a woman diagnosed with dementia returning to her childhood home only to discover that her egg-shaped doll loves him a bloodbath.

As for this year, we’ve already got two Pinocchio films coming out in September and December, with one of them promising a darker take on the wooden puppet who wanted to be a real boy. Guillermo Del Toro’s stop-motion Pinocchio, which premieres on Netflix in December, will be set in 1930s Fascist Italy and will see Pinocchio recruited into the military because the fascists see the unkillable marionette as the perfect soldier.

Back to Winnie and his bloodied hammer...

Beyond the gimmick of setting Pooh and Piglet on a journey to quench their bloodlust, Rhys Frake-Wterfield’s slasher take on a childhood classic could yield some surprises.

The original stories were a heartwarming reminder that you can cling onto parts of childhood in order not to lose your sense of wonder. Winnie the Pooh: Blood and Honey seems to explore the flipside of that coin, and could have a Toy Story-shaped theme exploring the turmoil of growing up and leaving childish things behind. It could also delve into the pitfalls of nostalgia and how potentially dangerous it is to forcibly ossify the things we loved us children without accepting that the passing of time changes everyone and not just us.

Or this could be wishful thinking and all it’s going to be is a brain-scrapingly daft B-movie that provides some semi-decent kills featuring the age-old stalking-bikini-clad-teens trope, and hopefully the line “Oh bother” making an appearence at some point.

So, maladroit attempt at provoking the ire of Milne purists who will complain that Piglet is canonically shy and that the author would be spinning in his grave like a rotisserie chicken, or slasher stroke of genius?

We’ll have to wait to find out, as the film does not yet have a release date. It can’t come soon enough though. And what’s certain is that any dark reimaginings of beloved IPs are far more interesting than Disney’s tiresome and deeply cynical tactic of live-action remaking all of its back catalogue classics.

All we can do now is start praying to the cinematic gods that a horror spin-off starring an existentially-rattled Eeyore debating on whether to take more naps or team up with a coked-up Tigger cranking up a chainsaw is already in the works.