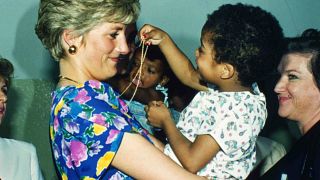 FILE - Britain's Princess Diana, the Princess of Wales, hugs and plays with an HIV positive baby in Faban Hostel, San Paulo, on April 24, 1991   -   Copyright  Dave Caulkin/AP
The opinions expressed in this article are those of the author and do not represent in any way the editorial position of Euronews.
By Amaranta Zermeno Jimenez  •  Updated: 31/08/2022

A fashion icon, a loving mother and a philanthropist. That is the legacy that Princess Diana of Wales left behind at the moment of her death on August 31, 1997.

And that is the thing about legacies, isn’t it? Here we are, 25 years on and the repercussions of Diana's  decisions and actions still weigh heavy in the hearts of many people today, even in those, like me who were not born during her lifetime.

For better or for worse, Diana was at the very centre of the media’s hawkish gaze, from the moment she entered the public's eye, right up to her bitter end. While British TV and tabloids were the main windows to the life of the royals in Buckingham Palace, today her life (its ups and downs) can easily be found in the internet, and specially thanks to a large selection of entertainment: from documentaries, to Netflix series, to award nominated films.

As it was during her life, Diana’s is still loved nowadays by younger generations. It’s not hard to find accounts on any social media platform dedicated purely to the life of Diana and everything she still represents: There are Instagram and TikTok accounts that post her best portraits, gather her most memorable outfits (sometimes even classifying them by colour), or what they consider her most relevant achievements.

What’s interesting to note is that many of Diana’s admirers today are very young, and not all of us were born in the UK. Now, however, it is relatively easy to access all sorts of information about her life. And of course there are many who believe she was “mistreated” by the mainstream media, and even the royal family.

“I'm not sure of how I met her. Probably through television, watching some news or a documentary about her. But what I do know for sure is that when I was little and asked who she was, all my family knew her story and had some interesting information about her life, both public and private”, explained 24-year-old Spanish journalist and film student Santiago Martinez.

I think that having met her after her death, my conception of her has always been very mythologized. Older people knew her as a real person. Younger people know her as a myth.

Whether through the memory of our parents, or through the depiction that we are given through the media that we consume today, Diana’s legacy remains pretty much intact in the minds of many young people, and maybe there is a reason for that.

For some young women, and I include myself in this group, she was harsh proof that being a Princess is not as glamorous as we thought, and that being a public figure can actually be burdensome. But at the same time, to me she demonstrated that Princesses, as strict as that title might seem, can be other things.

Let’s take a look at how the most iconic moments of the life of Diana Spencer broke the mould and crafted a myth that transcended both frontiers and generations.

Princesses are as human as the rest of us

Like all fairy tales, Princess Diana's story began with a prince. Her public image really took off in 1981 with the announcement of her engagement to Prince Charles, with a TV interview where Diana displayed a mostly shy demeanour on camera: head slightly tilted, gaze partially hidden by her hair, a small habit of biting her lips and an arm wrapped around herself.

This “shyness” was something that actually marked her at the beginning of her public life. Whether hidden behind her hair or behind a thick bridal veil, Diana was even pinned as “Shy Di”, even though she would later prove that she was not at all as the media portrayed her to be.

Timid? maybe. But who wouldn't lower their head from time to time, when suddenly the weight of a crown and a thousand camera lenses rain upon you? Diana was perfectly sociable and outgoing, to the point of casually dancing with John Travolta at a White House dinner in Washington.

“I think what I, and so many other people, like about Diana is that she made the royal family feel more human. Even if I do think that what makes the royal family so fascinating is precisely how distant from our reality they seem, at one point or another if there's no way to empathise with them you stop caring”, said Gabriella de Caro, a 24-year-old architecture graduate from the Dominican Republic.

Diana proved that a princess can be very much like anyone else. A young woman finding her own way to deal with being the centre of attention. A woman, who like any other human being, succumbs to her physical needs, to the extent of falling asleep during an evening at the Victoria and Albert Museum in November of 1981 (shortly before publicly announcing that she was pregnant).

A woman who in addition to being a princess, was also a mother, and did what many mothers do: running barefoot at a mothers race, held during a sports day at Wetherby school, where her son Prince William was a pupil. Getting buried in the sand while vacationing, or wet on a fairground boat ride with her sons.

Princesses are doing it for themselves

Just as there are social media profiles that collect the best Bella Hadid outfits, there are accounts that do the same with Princess Diana. And that doesn’t mean only shinging a light on the most flasy and elegant dresses worn on official events, but also appreciating her style on her everyday clothes. Her iconic “laid back” style even inspired a photoshoot.

One of the best examples of how Diana set trends is the famous "revenge dress". An off the shoulder black dress that she wore the same evening Prince Charles confessed to his adultery in a TV interview. Such was the controversy at the time that the term “revenge dress” is still used today.

Indeed, Diana’s style is still alive and cherished. Many of her dresses were exhibited for a long time in Kensington Palace retracing her fashion story, and her streetwear style is constantly revived by fashion magazines, putting her outfits as inspiration back on the radar ever so often.

Princesses can be everyday heroes

While marrying the heir apparent to the British crown might entail the risk of living in his shadow, Diana managed to thrive under her own spotlight, through her own actions in social work.

The Princess of Wales main legacy is without a doubt her effect as a philanthropist. Patroness of many different charities and organisations, she often visited hospitals and schools, and developed interest in serious illnesses and health-related matters outside the purview of traditional royal involvement.

Undoubtedly, the best example of this were her multiple visits to AIDS and HIV positive patients, shaking their hands without gloves, thus breaking the irrational fear that the disease could be transmitted through casual contact. An important decision that not only educated people, but showed the depth of her compassion.

“It was probably very beautiful to see Diana grow into her own in real time. Going from an environment where she was mistreated to her being "released" in a way. Maybe if I lived at the same time as her, I would've been inspired by the way she fought her battles”, said de Caro.

Another example is her walk across an active minefield in Huambo, Angola, and her meeting landmine survivors. Her fearless way of support for an international treaty banning landmines.

Just as she used her influence and shared her spotlight with those who really needed the attention of the media, younger generations today openly defend Diana for opening up about her mental health, a topic that has received more attention in recent years. The Princess revealed she struggled with bulimia and postnatal depression.

Many compare Princess Diana’s experience to Meghan Markle, Duchess of Sussex. As a divorced, biracial American married to Diana’s son Prince Harry, Meghan Markle received her share of criticism by the British media. In 2020, the couple decided to step down as “senior” members of the royal family, and move to California. A decision that, many argue, Diana herself would have been proud of.

With Diana we saw warmth from the royal family for the first time in a long time and I think we haven't seen that warmth ever since.

I believe that having lived a lifetime under the public eye, even Princess Diana's smallest accomplishments were celebrated. And that her tragic death only sealed that memory, freezing it and turning her into a myth that will probably continue to be adored by many, for many years to come.

That doesn't take away from the fact that as a human, she was not perfect, and that she certainly made mistakes and did arguably reprehensible things. But in my mind, I choose to keep her as a role model, and as proof that great things can be achieved despite the difficulties life always presents.

The Crown is back: Here's what you need to know