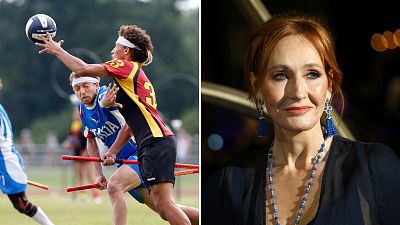 Quidditch, the real-life game based off the Harry Potter franchise, has cut ties with J.K. Rowling by rebranding to Quadball   -   Copyright  AP Photo
By Theo Farrant  with Euronews  •  Updated: 22/07/2022

The real life sport of Quidditch, inspired by the fictional broomstick game featured in the Harry Potter franchise, has officially changed its name to Quadball.

There are two many reasons why the main governing bodies of the sport have decided to change its name.

Firstly, the name Quidditch is trademarked by Warner Bros., which limits the sport's broadcast and sponsorship opportunities.

Secondly, the International Quidditch Association, has cited J.K. Rowling’s “anti-trans positions” as a reason for the change.

Over the past few years, Rowling, the writer of the Harry Potter books, has been accused of being transphobic - an allegation which she denies.

The strong backlash comes as a result of several public statements and tweets made by Rowling, suggesting her alliance to TERFism - trans-exclusionary radical feminism.

What has J.K. Rowling said?

Here are several of Rowling's tweets which have triggered strong public backlash and debate:

Radcliffe released a statement on the Trevor Project's website addressing Rowling's stance, writing, "Transgender women are women. Any statement to the contrary erases the identity and dignity of transgender people and goes against all advice given by professional health care associations who have far more expertise on this subject matter than either Jo [Rowling] or I."