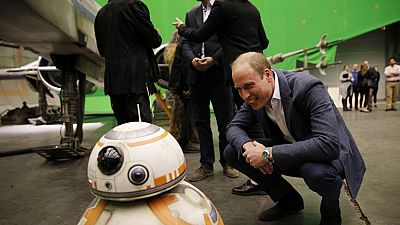 Britain's Prince William, Duke of Cambridge smiles at BB-8 droid during a tour of the Star Wars sets at Pinewood studios in Iver Heath, west of London on April 19, 2016.   -   Copyright  ADRIAN DENNIS/AFP or licensors
By Joshua Askew  •  Updated: 24/06/2022

Britain's booming film industry needs tens of thousands of workers in the coming years if it is to keep up with growth, a report has found.

Film and high-end television production in the UK could be worth nearly eight billion pounds by 2025 if the industry can find 21,000 more workers, according to a study by ScreenSkills, the UK's industry-led skills body for the screen industries.

Between 15,130 and 20,770 additional personnel are needed within three years to keep pace with demand, which will also require around one hundred million pounds of investment in training.

Authors of the report conclude that the UK's film and TV industry is likely to grow at an annual average rate of 7.3% between 2022 and 2025.

"The film and television industry is one of the UK’s great success stories and we need to work together to keep it that way," said Seetha Kumar, ScreenSkills chief executive.

"Growing the workforce will help ensure the country fully benefits from the projected growth in production expenditure.”

It said the estimated economic return is more than 15 times the cost of the training investment, describing this reward as "compelling".

Already the industry generates the equivalent of 122,000 full-time jobs in the UK.

“It is important that films of every scale and budget have the right people for those productions, so it is useful to understand what is likely to happen in the next few years," said Anita Overland, producer and chair of the ScreenSkills Film Skills Council.

"This [report] is a reminder of how much further work is needed – financially but also in terms of creating opportunities for people to learn on the job," she added.

The report also found that, alongside staffing shortages, studio space is an issue.

However, it said that without an increase in the supply of skilled crews, this additional stage capacity could be severely underutilised.

The UK's film industry is currently enjoying a "golden era" according to the British Film Institute, with the organisation's chief executive Ben Roberts saying "in terms of studio real estate, we’re currently bigger than Hollywood."

“We used to be a cottage industry, but now we’re on a par with manufacturing."

Netflix, which has pledged to spend £1bn on UK productions every year, is doubling its studio space in Shepperton, where Jeff Bezos's Amazon Prime Video has also signed a multi-million-pound deal.