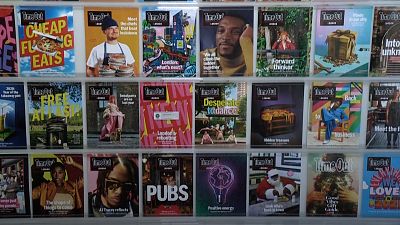 London's Time Out magazine is distributing its last ever printed edition on Thursday 23 June, bringing an end to the publication's 54-year run.

There are four unique versions of the last ever edition, titled “London Rising”, each with a front cover by a different London-based artist. It even features a send-off section from Sadiq Khan, the mayor of London.

The magazine will continue to publish stories online and through a new daily email.

The history and legacy of Time Out

Time Out started out as a London-only listings publication in 1968, created by the late Harvey Elliot.

At 21 years old, Elliot used his birthday money to produce a one-sheet pamphlet, which he distributed on King's Road, Chelsea.

The magazine was designed to provide the best cultural things to do in the city - curating art, film, theatre, restaurants and more.

"Time Out started in London in 1968. There was nothing like it. There was not a guide on the streets to tell people what to do culturally, theatre, art, food and drink, etc. It just didn’t exist," explains Dave Calhoun, the chief content officer for Time Out UK.

The magazine has since grown to cover more than 300 cities in 59 countries.

The London edition became a free magazine in 2012 and is often handed out at central train stations, as well as being found in supermarkets, concert venues and even pubs.

During the pandemic of 2020, Time Out changed its iconic logo to "Time In", and shifted its focus more to at-home entertainment, food delivery and supporting local businesses.

The company founder Harvey Elliot passed away from lung cancer on 17 July 2020. A special Time Out edition featuring a photo of Elliot on the front cover was released, along with tributes to his achievements.

The company is now moving to focus on digital-only content.