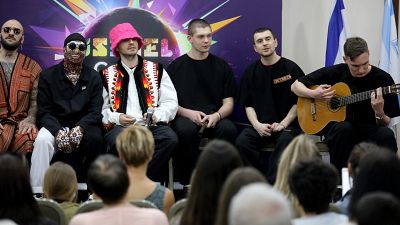 Band member, Oleksandr Slobodianyk said their performance at the wildly popular contest will show the world that, "Ukraine is alive and kicking and moving forward," despite Russia's invasion of the country.

Ukraine are the favourites to win this year's competition.

"I will do everything so our country will not only win the war but also win the Eurovision," said Slobodianyk.

Sonia Yevgeniyeva, 16, recently immigrated to Israel, said her friends back in Ukraine are impressed that she met with the band.

Russia will not be allowed an entry in this year's Eurovision Song Contest, the European Broadcasting Union said in a statement in February.

The union said including Russia's entry would bring the competition into "disrepute".

Italian rock band and winners of contest last year, Måneskin, recently announced their decision to cancel the Russian leg of their world tour in order to show solidarity with Ukraine.

The Eurovision Song Content Final is being held in Turin, Italy, on May 14.

Check out the video above to hear the performance

Ukrainians flock home despite war raging in their home country