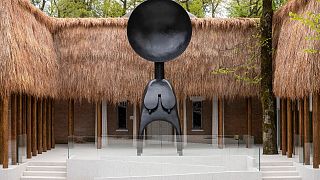 As the prestigious Venice Biennale kicks off this weekend, the first Italian woman director of the exhibition, Cecilia Alemani, has chosen to make a statement with her choice of artists.

Alemani has weighed the scale firmly in favour of female and non-binary artists for the 59th edition of the world’s oldest international exhibition.

It is a long-awaited change after decades of notoriously poor gender representation at the Venice Biennale. Only in 2019 did the artist representation reach gender parity for the first time. This year, however, approximately nine out of 10 artists are women.

Alemani describes her decision to fill the Biennale with female artists, whose work will be viewed by hundreds of thousands of visitors, as, “a choice that reflects an international art scene full of creative ferment and a deliberate rethinking of man’s centrality in the history of art and contemporary culture.”

Bringing female artists out of the shadows

The title Alemani has chosen for this year's event, "The Milk of Dreams," is borrowed from a book of fables by British-born Mexican surrealist Leonora Carrington. The homage hopes to give greater recognition to the often-overlooked women artists of the historical avant-garde movements.

The fulcrum of the exhibition located on the lower level of the Central Pavilion houses five capsules featuring artworks by Carrington, Eileen Agar, and Claude Cahun among others.

“The works of these and other women artists of the early 20th century [...] summon up a domain of the marvellous,” says Alemani, “where anatomies and identities can shift and change, following the desire for transformation and emancipation.”

Must see female artists at the Venice Biennale

Of the headlining female artists in the 80 national pavilions, Zineb Sedira at the French Pavilion is one to look out for. Located in the Giardini della Biennale, one of the main sites of the Biennale along with the Arsenale, Sedira’s Dreams Have No Titles gives visitors the impression they have stepped into a classic film set.

In the pavilion, the French-Algerian artist explores Algerian cinema from the 60s and 70s and its connections with Italian and French film. The installation includes film sets taken from classics like The Battle of Algiers (1966) interspersed with autobiographical elements about her own life. The work highlights the period of Algerian independence and the fight to construct a cultural identity no longer defined by French colonialism.

At the Nordic Pavilion, illuminated with natural light and built around three trees that sprout through the roof, indigenous Samí artists are making their groundbreaking debut. Of the trio exhibiting, two are women. Pauliina Feodoroff and Máret Ánne Sara explore issues of colonialism and land guardianship. Sara’s suspended sculptures of reindeer calves oscillate between eerie and hopeful while Feodoroff’s work looks at the industrial logging of Sámi forests, cleared to make way for the construction of wind farms.

Black female artists make their debut at the Venice Biennale

Two prominent pavilions, the United States and the United Kingdom, are being represented by black women for the first time this year.

Sculptor Simone Leigh has filled the US pavilion with large-scale ceramic and bronze sculptures that continue her ongoing exploration of black female subjectivity. The sculptural forms combine female bodies, traditional objects and vernacular architecture, recalling the artistic traditions of Africa and the African diaspora.

Entitled Sovereignty, the exhibition explores notions of self-governance and independence. “To be sovereign is to not be subject to another’s authority, another’s desires, or another’s gaze,” says Leigh, “but rather to be the author of one’s own history.”

Her Last Garment sculpture, for example, is a scene of a laundress washing clothing in a pool.

Leigh took inspiration from 19th-century photography of Jamaica. She explains that images like this were used by the British colonial government to foster an image of the island’s inhabitants as “loyal, disciplined and clean.” For Leigh, this “promoted an idealised and sentimentalised view of colonised people” and a lack of autonomy or sovereignty over their own representation.

Sonia Boyce’s installation in the British Pavilion explores how “listening to people vocalise freedom, imagination and playfulness can lead to new possibilities.” Feeling Her Way presents video installations of black female musicians improvising in recording studios. Viewers can watch as they come together to sing and delight in discovering each other’s voices.

In one room, the wall is filled with album covers and singles that Boyce collected over six months in 2021. Still bearing discounted price labels, the disks represent the voices of black British women who are or were often undervalued.

Conceived eight years ago, Paradise Camp features an archive section where Kihara has collected posters, colonial replica portraits, news articles and pamphlets about the Fa’afafine community. During her research, Kihara discovered that some of Paul Gauguin’s Tahiti paintings were based on images of Samoa’s Fa’afafine, inspiring Kihara to replicate the paintings with modern-day subjects.

The photos in saturated colour depict various members of the community in seemingly idyllic settings. But Kihara says she also wanted to reveal the “real stories of trials and triumphs that lie beneath.” One subject, for example, is pictured with her adopted children. “She is defined as male on the adoption certificate but the children call her their mother,” she says.

There is also a video installation playing a five-part episodic “talk show” series where a group of Fa’afafine comments wittily on a selection of Gauguin’s paintings.

In bringing images of the Fa’afafine to the Biennale, Kihara says, “I wanted to empower the Fa’afafine community and anyone else who also feels inspired is a bonus.”