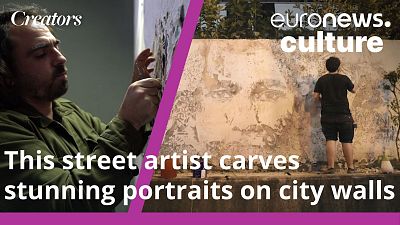 “I say that I'm kind of an urban archaeologist because I basically carve on the walls of the city.”

Alexandre Farto, aka Vhils, is considered one of the top urban artists in the world.

Like many street artists, he started out painting illegal graffiti back when he was 13. But by the age of 16, the Portuguese artist was already questioning what he was doing and looking for his signature style.

“I wanted to push what I was doing in the public space,” he says. “I sort of realised that all of us were adding layers on walls ... they were accumulating the layers of changes.

“I came up with the idea: instead of adding I would remove the layers of paint onto the walls.”

So using hammers, chisels, knives and even explosives, Vhils began to etch and carve his art onto the walls of Lisbon.

“I would go and break the wall, extracting and exposing the layers that were inside of the city in a way.”

He also took his destructive style to advertisement billboards and other abandoned surfaces like doors and demolished buildings.

“I would go and vandalise them, in a way, but creating portraits of someone that was living in the city … It was a homage to the everyday heroes that live in the cities that go from A to B, that make all the city work and make them visible.”

A big break with Banksy

Around the age of 19, Vhils went to study in London and got his big break when he was invited to appear at Can’s festival, a 2008 event that brought together some of the biggest names in urban art.

During that event, Vhils was lucky enough to be featured next to the elusive and legendary artist Banksy. The visibility he gained from that festival propelled his career forward and showed that his art could resonate outside of Portugal.

One of his early notable projects was in Rio de Janeiro, where a local “Morro” (favela) was being demolished.

“People were feeling and they were not being heard, they were being expropriated,” explains Vhils, who worked with an NGO to carve the faces of local people into the ruins of their homes.

“Eventually that brought attention to the situation and it created a bridge between the community and the way that the city was looking at them… I realised what I was doing could actually put a light on, put attention on, a subject. For people to be heard.”

Vhils went on to open his own studio, to build a talented team that could help with the complicated logistics of gigantic murals and use of explosives.

Together with his team, they have since carved portraits on walls all over the world, from Shanghai and Paris to LA and Mexico City.

Find out more about Vhils’ destructive and explosive techniques in this episode of Creators, a series where we get inside some of the world's top creative minds. Watch the video in the media player above.