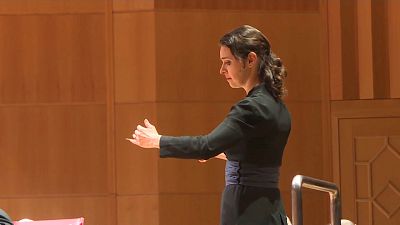 Ukrainian-born conductor Oksana Lyniv has been nominated as the first female music director of an opera foundation in Italy, the Teatro Comunale of Bologna, adding another string to her bow as a record-breaking figure in the world of classical music.

The 43-year-old, who was also the first female conductor to ever conduct at the Bayreuth Festival, a music festival during which performances of operas by the 19th-century German composer Richard Wagner are presented, will begin the three-year posting as musical director this month.

The passion she shows on stage when conducting the orchestra is what differentiated her from others, and gender was not an issue for Lyniv, the orchestra, or those who appointed her to this position.

"What matters the most," the Teatro Comunale of Bologna said, "is her talent and passion for the job".

"Of course, it is something very special, but you know, for the orchestra, my gender doesn't matter, because right now we have a very complicated programme — we are playing Richard Strauss, we are playing Richard Wagner music; this is the top symphonic repertoire in the world and we only have rehearsed for three days," Lyniv told Euronews.

Born in Brody, western Ukraine, to musician parents, Lyniv conducted her first orchestra when she was just 16 years old before going on to study at the Lysenko music school in Lviv.

Now the little girl has come a long way, although she said it was difficult for female musicians to get on as the majority of conductors and teachers are male.

Lyniv will replace previous Italian director Michele Mariotti, after 10 years at the Teatro Comunale of Bologna.

"After 10 very nice years, when we gradually grew apart from the previous music director, the young Italian Michele Mariotti, we wanted to take a further step forward and look for a different relationship and, therefore, towards a middle-European director with a German background," said superintendent Fulvio Macciardi.

She hopes her new position will be a message for all women who want to reach the top of their careers and to get more young people interested in the opera.

Her first opera production will be Andrea Chénier by Umberto Giordano and she will also conduct the music of some of her favourite composers, including Wagner, Tchaikovsky, Bruckner, Richard Strauss, and the Ukrainian composer Boris Lyatoshinsky.