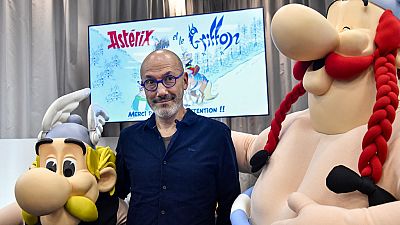 French writer Jean-Yves Ferri poses between effigies of Asterix and Obelix during the presentation of the new "Asterix" album in Paris, on October 11, 2021.   -   Copyright  ALAIN JOCARD / AFP
By Josephine Joly  with AFP  •  Updated: 13/10/2021

The wait is over for Astérix fans, as the Gaulish warrior and his red-haired best friend Obélix make a return with the latest release of the comic book series 'Astérix and the Griffon' set for October 21.

The 39th album sees the two heroes journeying to the East to meet a little-known people from antiquity, the Sarmatians. Their totem is the Griffin, half-eagle, half-lion, much prized by the Roman army of Julius Caesar.

A nomadic people, the Sarmatians lived in a region stretching from present-day Ukraine to the foothills of the Caucasus and the steppes of Central Asia.

"Astérix has already been in quite a few countries [...] In this one, he's visiting a 'cold' country. It's new, it sets the tone of this album, which takes place mainly in the snow," said writer and designer Jean-Yves Ferri.

"Historically, we don't know much about them. Herodotus and Livy spoke of the Sarmatians. They were Barbarians, but a somewhat mythical people," he added.

The drawings borrow from a certain Russian, Kazakh, or Mongolian tradition, and their names all end in '-ine' (for example "Cékankondine").

In 'Astérix and the Griffon', Gauls and Sarmatians have to unite to fend off the villainous Roman legionnaires.

'The Adventures of Astérix': a legacy

After the death of its creator René Goscinny in 1977, the series was continued by co-creator and cartoonist Albert Uderzo, who himself entrusted it in 2011 to scriptwriter Jean-Yves Ferri and cartoonist Didier Conrad.

"When I start writing, I don't think about Astérix. I think about what theme I would like to tell this time. And it's afterward that the work starts because then we try to put it in Astérix's clothes, i.e. 'is this a story for Astérix? Can I keep this idea? And if I keep it, how can I make the characters we know evolve in this story?'," declared Ferri.

It will be the first Astérix book since the death of Uderzo in March 2020. The cartoonist and Goscinny founded the series in 1959.

"The death of two men did not justify the destruction of an entire village and universe, and I think readers are very happy with the decision Albert Uderzo and I made to allow Astérix to continue," noted Anne Goscinny, daughter of the scriptwriter.

Keeping up with modernity

The latest album has an ecological tone to keep up with modern conversations about climate change.

"The Romans represent a bit of a Western attitude towards nature, the way they take everything for themselves. Whereas the Sarmatians are presented as respectful of nature, and of animals in particular. The Gauls are a bit in between," Ferri explained.

Among the new characters is a Roman geographer, Terinconus, who, before setting off on this exploration, learns about "the map and the territory" - which is also the name of a novel by French writer Michel Houellebecq, who shares Terinconus' features.

"The country doesn't really exist: it's more like a fairy tale, with Gauls who lose their bearings," Jean-Yves Ferri added.

'Astérix and the Griffon' is the last story that Uderzo was able to supervise. "He only saw the first drafts of the script and the first sketches," said his daughter Sylvie Uderzo.

Always a success for the French, and especially towards Christmas, the new album will have an initial print run of 5 million copies in more than 17 different languages.

The success of Astérix has stretched to other countries too, notably in Germany, Spain, and Italy.