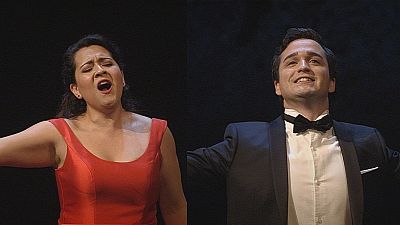 The competition was founded by Plácido Domingo in 1993 to help launch the careers of rising talent with a reward of $30,000 and connections to the world's most important opera houses. The goal of the event is to attract a range of voice tessituras from all over the world where they can audition in front of a panel of distinguished figures in opera. The showcase is both competitive and prestigious.

Winning the prize money is just one of the benefits from succeeding in the competition, however. The jury is comprised of general directors and casting directors from international opera houses. This means a number of singers have gone on to star in the jurors' upcoming productions.

Xabier Anduaga, winner of best male voice, impressed the judges with his aria "Ah! Mes amis" by Donizetti. On top of this he also managed to win the Plácido Domingo Ferrer Zarzuela Prize - a separate category where competitors had the choice to sing a third aria from the Spanish lyric-dramatic genre, zarzuela. He performed "By the smoke you know where the fire is" from the zarzuela Doña Francisquita, by Amadeo Vives. He explained how he focuses himself when he is on stage:

"I try to think that I'm on the stage doing the opera, not doing the competition, or doing an audition. I think that I'm Tonio from "La Fille du Régiment". I don't think that I am singing, it's Tonio that is singing so that is more comfortable for me."

"Sadly, we don't have a national opera house - yet. Someday we will. There's three teachers that I would say were in Guatemala. And one of them sadly passed away two weeks ago and she was my teacher so I must say that it was a beautiful thing to win this - and to give this to her as well..."

For the first time ever Operalia was held in the Czech Republic at Prague's National Theatre - an establishment that has produced artistic performances for more than 130 year. The World Opera Competition is held in a different city every year - the first being in Paris, with others including Mexico City, Madrid, Lisbon and Tokyo. This year was the 27th edition of Operalia.

Each year around 1000 young singers between 18 and 32 submit applications. A jury of three respected opera personalities listen to the recordings that are sent in and rate them on a scale of one to ten. Of these 1000, only 40 are invited to participate in the competition.

A jury of ten opera experts, overseen by Plácido Domingo as a non-voting member, listen to the 40 candidates live during two days of quarter-finals. Each singer performs one opera aria from a list of four that they compile themselves. Then the judges request a second aria from the same list. Only 20 candidates make it to the semi-finals and out of those only 10 compete in the final.

The final round is presented in the form of a concert with a full orchestra to accompany the competitors. This year the National Theatre orchestra played alongside the finalist, with Plácido Domingo conducting.