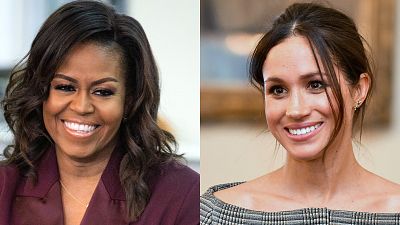 Meghan, Duchess of Sussex, figured she would reach out to a mother who knows all about raising children in the public eye when she put together the September issue of British Vogue as the magazine's guest editor.

The former Meghan Markle, who gave birth to son Archie in May, received some advice from Michelle Obama on motherhood, what she tells her daughters, and even her favorite sound in an interview with the former first lady for the celebrated fall issue.

The mother of two adult daughters gave her take on parenting to her friend Meghan now that the Duchess and Prince Harry have welcomed their first child.

"Being a mother has been a masterclass in letting go,'' Obama said. "Try as we might, there's only so much we can control. And, boy, have I tried - especially at first. As mothers, we just don't want anything or anyone to hurt our babies. But life has other plans."

Allowing daughters Malia, 21, and Sasha, 18, to forge their own identities while growing up in the White House was a lesson she and former President Barack Obama learned during his two terms.

"Motherhood has taught me that, most of the time, my job is to give them the space to explore and develop into the people they want to be,'' she said. "Not who I want them to be or who I wish I was at that age, but who they are, deep inside.

"Motherhood has also taught me that my job is not to bulldoze a path for them in an effort to eliminate all possible adversity. But instead, I need to be a safe and consistent place for them to land when they inevitably fail; and to show them, again and again, how to get up on their own."

Obama, who wrote about her struggles just to have children in her best-selling memoir, also addressed the pressure that kids can feel when it comes to external expectations for their lives.

"As a younger woman, I spent too much time worrying that I wasn't achieving enough, or I was straying too far from what I thought was the prescribed path,'' she said. "What I hope my daughters will realize a little earlier is that there is no prescribed path, that it's OK to swerve, and that the confidence they need to recognize that will come with time."

The former first lady also thought back to when she was a teen, imagining what her younger self would think of how her life turned out.

"She'd remind me there are still too many girls on the South Side of Chicago who are being shushed, cast aside or told they're dreaming too big,'' she said. "She'd tell me to keep fighting for them. If I'm being honest, she'd probably smile about how cute my husband is, too."

Now that her daughters are adults, she misses her favorite sound from all those years ago.

"When Malia and Sasha were newborns, Barack and I could lose hours just watching them sleep. We loved to listen to the little sounds they'd make - especially the way they cooed when they were deep into dreaming ... But there is something so magical about having a baby in the house. Time expands and contracts; each moment holds its own little eternity."