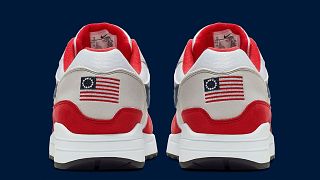 The design has since been sent back to the brand from retailers.   -   Copyright  sneakernew/Instagram
By Lindsay Lowe  with TODAY Lifestyle  •  Updated: 03/07/2019

The sneakers feature an early version of the American flag woven onto the heel. Known as the "Betsy Ross flag," it has 13 stars in a circle representing the original 13 colonies.

According to the Wall Street Journal, Kaepernick reportedly reached out to Nike officials and argued that the Betsy Ross flag is a reminder of an era when slavery was legal in America.

The Betsy Ross flag was created in the 1770s — though probably not by Betsy Ross, as the legend goes — and was one of the flags flown during the American Revolution.

Later, however, it came to be associated with white nationalism. Members of the largest neo-Nazi organization in the country, the National Socialist Movement, held up the flag during an anti-immigration rally in Columbia, South Carolina, in 2007.

"Historically, these symbols have been used by white supremacists, both to hearken back to a time when black people were enslaved, while also painting themselves as the inheritors of the 'true' American tradition," Hopkinson told TODAY Style in an email. "More recently, white nationalist groups such as Patriot Front and the American Identity Movement (formerly Identity Evropa) have branded themselves in the trappings of Americana with the aim of creating a more marketable image."

Nike shoes featuring the flag had already been shipped to retailers, but after Kaepernick raised concerns, the brand asked stores to send them back, people familiar with the matter told the WSJ.

"Nike has chosen not to release the Air Max 1 Quick Strike Fourth of July as it featured an old version of the American flag," Nike said in a statement to TODAY.

Kaepernick, 31, is a former quarterback for the San Francisco 49ers. He made headlines three years ago when he began kneeling during the national anthem to protest police brutality and systemic racism in America. Some applauded his protest as a powerful example of free speech, while others called it unpatriotic.

In 2016, Kaepernick opted out of his contract and has not been signed to a team since then. He did, however, sign a new endorsement deal with Nike last year, becoming the face of a recent "Just Do It" campaign.

His Nike ads sparked plenty of debate, with some people boycotting Nike on social media and even burning their Nike shoes.

Nike's latest decision to pull the Fourth of July sneakers is proving just as controversial. Texas senator Ted Cruz weighed in, claiming Nike "only wants to sell sneakers to people who hate the American flag."

Arizona governor Doug Ducey announced on Twitter that he will withdraw all financial incentives for a manufacturing plant that Nike has been planning to build in the state.

The controversy will probably continue. In the meantime, people will be looking elsewhere for their Fourth of July-themed footwear.