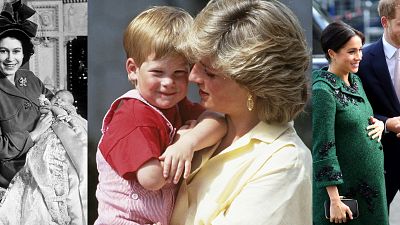 Far left: The former Princess Elizabeth happily shows off her first child, Prince Charles, at his 1948 christening. After Elizabeth became Queen of England, royal duties kept her away from home for months at a time. Center: Princess Diana holds a young Pr   -   Copyright  Getty Images
By Laura T. Coffey  with TODAY Lifestyle  •  Updated: 20/04/2019

Ahhh, life as a royal baby. Such luxury. Such privilege. Such intrigue and bloodlust and loneliness.

OK, fine: The last part of that description probably won't apply to the baby due to be born to Prince Harry and Meghan, Duchess of Sussex, or to the three children of Prince William and Catherine, Duchess of Cambridge. But it's an apt portrayal of royal family life in Britain over the past 1,000 years, when children of the monarchy found themselves isolated, kidnapped, used as pawns in political alliances or viewed as dangerous rivals by their own parents.

William and Kate have taken pains to spend quality time with their children and normalize their upbringing, and Harry and Meghan are expected to follow suit. Their modern approaches to parenting make it easy to forget that in the not-too-distant past, a royal childhood could be a lonely affair handled by governesses, nannies, private tutors and wet nurses.

"While Queen Mary noted in her diary that she would 'miss the dear child very much indeed,' the daily care of John ... was entrusted almost completely to his governess, Charlotte Bill, and he lived in his own residence (the Wood Farm cottage) on the Sandringham Estate," Harris told TODAY Parents. "A royal child in his situation today would receive more personal attention from his parents and probably remain in the family home."

Arduous tours of the Commonwealth also could leave royal children separated from their parents for months at a time. In 1953, Queen Elizabeth II and Prince Philip embarked on a six-month journey (by sea!) to New Zealand, Australia and several other countries. They left their young children, Charles, 5, and Anne, 3, at home. The world was watching as the royal parents returned to London; when they arrived, they maintained strict etiquette protocols.

"(Prince Charles) had to wait for his personal greeting while the Queen shook hands with a line of dignitaries," Elizabeth Renzetti wrote in The Globe and Mail. "He may have been hoping for a hug; he got a handshake like everyone else."

Harris said Queen Elizabeth and Prince Philip likely were much more relaxed with their children in private, but they used formal etiquette in public. That tradition was blown away by Princess Diana, who not only brought her children on royal tours but also showered them with public displays of maternal affection. On one occasion in 1991, she was so happy to be reunited with sons William and Harry aboard the Royal Yacht Britannia in Toronto that she hugged them as TV cameras rolled.

Diana changed popular perceptions of royal parenting in other ways. For instance, she looked for opportunities to expose William and Harry to nontraditional experiences for royal children.

"Diana took her children to Disneyland and McDonald's, insisting that they stand in line with the other customers," Harris wrote in her "Raising Royalty" book. Diana also made sure her sons understood the causes she championed; the "People's Princess" spent time with victims of landmine explosions, HIV and AIDS patients, homeless people and sick and vulnerable children.

"I want my boys to have an understanding of people's emotions, their insecurities, people's distress and their hopes and dreams," Diana once said.

Harris noted that after Diana died in 1997, Charles drew popular sympathy as a single parent — a situation that altered perceptions of royal parenting even more.

"There was extensive press coverage of him taking William and Harry on ski vacations," Harris said, "and taking Harry to see the Spice Girls perform at a charity concert."

"During their 2016 tour of British Columbia and the Yukon, George and Charlotte were based at Government House in Victoria and William and Catherine returned from public engagements to spend time with them almost every evening," Harris said. "On royal tours where the whole family participates, there are public engagements especially for the children, including a trip to the Sydney zoo for Prince George in Australia and a children's party for Prince George and Princess Charlotte in Canada."

Prince William made headlines for becoming the first senior member of the royal family to take parental leave, Harris said — sparking conversations across Britain about work-life balance and working conditions for new parents.

"I am concentrating very much on my role as a father," William told BBC correspondent Nicholas Witchell in 2016. "I take my duties and my responsibilities to my family very seriously and I want to bring my children up as good people."

_Never miss a parenting story with the TODAY Parenting newsletter! Sign up here._

The dramatic shift among royals toward hands-on, modern parenting styles means that Meghan and Harry will be able to bring their own innovations to child-rearing.

"Harry and Meghan have prioritized their child's privacy and their time together as a family from the very beginning by keeping the birth location private," Harris said. "As seventh in line to the throne, the royal baby will attend royal events such as weddings and Trooping the Colour but will also have the opportunity to pursue his or her own interests and have a career independent of royal duties."

In other words: Harry and Meghan's royal baby has the potential to be the freest spirit yet in the history of the monarchy.