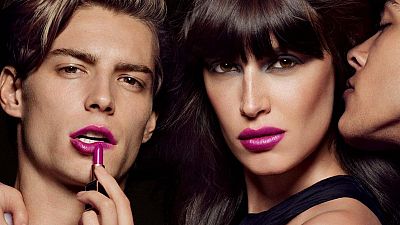 A shift in stereotypes is changing the way we label lipstick. With big beauty brands now showcasing varied personalities in their marketing campaigns, and new genderless cosmetics appearing from all corners, the idea that makeup is ‘one sex only’ is becoming increasingly archaic.

A 2018 Mintel report confirmed this, saying that ‘consumers are moving away from traditional gender typecasts and expectations. As such, they are going to come to expect brands to push a gender-neutral message to the fore of their new product development and marketing campaigns.’

And, while a whole host of companies still need to get on board. The number of important players changing their ways (as well other people’s perceptions) is vastly growing.

Makeup artist Jessica Blackler and founder of genderless beauty brand Jecca, tells Euronews that she created her range after being made aware of the lack of makeup that catered towards the trans community. “Consumers were constantly telling me they felt overlooked by mainstream beauty companies. I began working with the LGBT community a couple of years ago, and back then they were totally ignored."

But all makeup is unisex, right?

And a blusher or bronzer will create the same effect on your skin regardless of your gender. So, if brands just speak out to everyone, the issue is surely solved? No, not really, Jessica explains, ‘Yes, things are finally changing (slowly) and mainstream companies are taking note, however, it’s not just about developing a unisex product to tick off all the boxes.’

Jessica adds, ‘It’s important for us to make sure that our customers feel represented and supported – it’s absolutely ok for everyone to be different – that’s why we use ‘real’ people of all genders in our campaigns.’

With the emergence of niche brands like Jecca saying gender rules are no longer a thing, it means the pressure on large-scale corporations - has been seriously applied.

Jecca is also natural, PETA and vegan friendly and they also donate 5% of its profits to Stonewall, a lesbian, gay, bisexual and transgender rights charity in the UK.

So, whether it’s neutral packaging or all-encompassing messages and makeup, these are the other brands that are saying no lines should be drawn.

Overlapping both the men’s and women’s section of the site, the ASOS’s beauty department, Face + Body, offers the same cosmetics to every consumer, regardless of their sex. The launch of the Face + Body also spread an all-inclusive message as it featured male, female, and non-binary models, to promote the range.

All embracing, Morphe encourage their shoppers to stand out, break rules and shut down stereotypes. Whether you’re male or female, their cruelty-free makeup is for everyone.

An early creator of male cosmetics, launching bronzing gels and brow gel for men in 2013, Tom Ford called his most recent lipstick collection Boys & Girls. Named after 100 famous friends, 50 boys and 50 girls, and the range was advertised by a gender-inclusive campaign.

In 2016 Anastasia Beverly Hills' released promotional images for their Glow Kit, which featured numerous male models wearing the shades from their infamous highlighting palette. Showing off killer cheekbones and a serious glow, the pictures conveyed the message that men should be free to wear makeup every day.

Known as the brand to break down boundaries on skin colour, beauty ideals and gender. Fenty constantly speaks to every individual, and they frequently feature all sexes on the imagery projected on their social media.