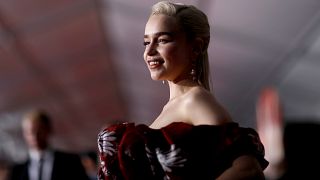 "Game of Thrones" actress Emilia Clarke penned an emotional essay revealing that she suffered two brain aneurysms, one in 2011 after filming the first season of the hit HBO series, and another in 2013, following the third season of the show.

In a lengthy article for The New Yorker, the 32-year-old actress, who plays Daenerys Targaryen on "Game of Thrones," said she suffered her first aneurysm while in the locker room of a gym in North London in February 2011.

"I was so fatigued that I could barely put on my sneakers. When I started my workout, I had to force myself through the first few exercises," she wrote. "Then my trainer had me get into the plank position, and I immediately felt as though an elastic band were squeezing my brain. I tried to ignore the pain and push through it, but I just couldn't."

Clarke said she left the workout class and once she made it back to the locker room she became "violently, voluminously ill." A woman in the locker room came over to see if Clarke needed help, and the next thing Clarke said she remembers was someone calling her parents and telling them to meet her at the hospital.

The actress, who said acting has always been her dream, was diagnosed with a subarachnoid hemorrhage, a life-threatening type of stroke caused by bleeding into the space surrounding the brain, and would need a "minimally invasive" surgery that did not require doctors to cut open her skull.

Over the next month Clarke was hospitalized, she suffered from vision issues, "unbearable" pain and memory loss.

"I'd never experienced fear like that — a sense of doom closing in. I could see my life ahead, and it wasn't worth living. I am an actor; I need to remember my lines. Now I couldn't recall my name," she wrote.

According to the Brain Aneurysm Foundation, aneurysms are fatal in about 40 percent of cases and of those who survive, just over 60 percent suffer permanent neurological deficit. About 15 percent of people who had a brain aneurysm die before reaching the hospital.

The actress said she suffered a second brain aneurysm in 2013 while in New York for a play she was in. After going to the doctor for a brain scan, Clarke said she was told that a growth on the side of her brain that she became aware of during her first hospital stay had "doubled in size" and required surgery.

"This time they needed to access my brain in the old-fashioned way — through my skull. And the operation had to happen immediately," she wrote.

Clarke said that the procedure left her looking as though she had "been through a war more gruesome than any that Daenerys experienced."

"I emerged from the operation with a drain coming out of my head. Bits of my skull had been replaced by titanium," she wrote.

Clarke, who wrote that she was previously asked by a reporter about her health troubles but denied it, said she is now ready to tell her "truth in full."

She also said she has taken up another passion besides acting — helping people recovering from brain injuries and stroke through a charity she helped develop called SameYou.