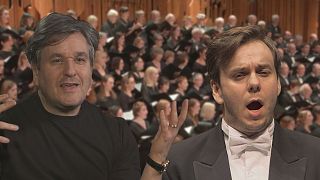 When you hear the name Puccini the first thing you probably think about is opera: but the great Italian composer's first major work was a piece of church music, the "Messa di Gloria". The London Symphony Orchestra recently performed it at the Barbican Centre under the baton of Sir Antonio Pappano.

The name Puccini is synonymous with opera but his first major work was an audacious and colourful church mass entitled 'Messa di Gloria'. (Mass of Glory) The London Symphony Orchestra together with The London Chorus recently performed the piece in the capital's Barbican Centre conducted by maestro Sir Antonio Pappano.

"It is undeniably Puccini"

"The 'Messa di Gloria' is not a mature work but that's what I think gives it its charm," Sir Antonio explains before adding: "It's an early, very early effort of his but it is undeniably Puccini.

The composer goes on to say: "Puccini came from a line of organists and choir masters but it was a voyage that he took to go see Verdi's Aida and this changed his life. Aida was something really new, with a more exotic musical language that appealed to Puccini."

After this experience Giacomo Puccini decided to follow in the footsteps of his hero Verdi and compose only operas. This 1880 work remains the only church mass that he ever composed.

French tenor Benjamin Bernheim says he has a special bond with the youthful piece composed by Puccini.

"It's very funny, because this is one of the first works that I sang. I was still a baby tenor and it was my first experience as a soloist with an audience and an orchestra. It's like a return to my beginnings and I can see the vocal difference between 15 years ago and now. It's like another world,"Bernheim says.

At the core of the mass is the Gloria, which includes a beautiful tenor solo called "Gratias agimus tibi". Sir Antonio says: "Would I say it's operatic. Not really. It's an in-between style. This becomes more operatic. This phrase...(starts playing the piano) that's more operatic but he does try to be liturgical, but of course in his bones he's already a man of the theatre."

"It finishes with a sort of smile in the music"

"There is a lot of joy in this piece and we really try to sing it with as much delight as possible," explains Bernheim, who goes on to say, "Moreover, it's a mass about glory and not a requiem. It's really something enlightened," adding, "It finishes with a sort of smile in the music. We expect that something is going to happen and it's the end. It's really wonderful."

When summing up the work by Puccini, Sir Antonio concludes by saying, "It does seem to sort of float away. I find that charming."