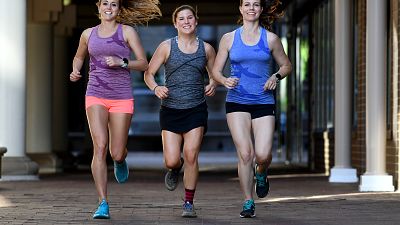 It's been two years since three runners banded together to found the Lane 9 Project in order to bring awareness to the prevalence of eating disorders among athletes. In that time, 32-year old Heather Caplan, 27-year old Alexis Fairbanks and 24-year old Samantha Strong, have played an integral role in doing just that. All three women suffered from hypothalamic amenorrhea — lack of menstruation — as a result of unhealthy relationships with food and sport.

Now they can see an impact of their work in all the right ways. "I definitely think there's been a big shift in how much attention the issue receives," says Caplan, a registered dietitian.

Still, as National Eating Disorders Awareness Week (Feb. 25-March 3) rounds out its 33rd year, Lane 9 and others invested in making a positive impact, know there is still much work to be done. The National Eating Disorders Association (NEDA) estimates that some 30 million Americans struggle with an eating disorder at some point in their lives. Slowly, however, a backlash against America's diet culture and its tie in to exercise is taking hold.

Runners, many of them high-level competitors, are among the most vocal in helping shed light on the issue and for good reason: research has shown that as many as 47 percent of elite female athletes in "leanness" sports experience disordered eating. Males, too, can fall victim. Esther Atkins, a U.S. marathon champ, is among those raising her voice and speaking out publicly.

Atkins herself has had an overall healthy relationship with food and sport over the years, but she has known many others who haven't been as fortunate — her sister included. "What I've come to realize is that eating disorders are a manifestation of, and self-medication for, another underlying mental condition," she says. "I believe that the course of action to help prevent them is to remove the stigma so that people can more readily acknowledge and accept the issue, and get help much sooner than they have historically."

This is where the Lane 9 Project comes in. "We realized that we can help educate athletes, teachers, coaches and parents, as well as provide a way for those affected to share their stories," says Caplan. "It's been a grassroots approach and as people share their stories and awareness in their social circles, the word spreads."

Both Atkins and Caplan point to society's role in contributing to eating disorders. "There's so much social pressure to be skinny," says Atkins. "It's ingrained at a young age that fat means lazy and slovenly. It's not fair and it pigeonholes people."

Society is starting to play a more positive role in that regard, however. "There are several movements coming together at once, like #metoo and body positivity, that are removing the shame and allowing people to tell their stories," Atkins says. "We need more of that."

The conversation needs to start early and everywhere

Conversations, social media awareness and education are all positive steps in the efforts to help diminish the prevalence of eating disorders. So too is bringing awareness to the risk factors, especially to coaches, parents and health-care providers, who often unwittingly contribute to the issue. "All three of us who founded Lane 9 experienced gaps in our health-care experience when it came to finding help," says Caplan. "Too often, health-care providers just don't know what to do."

Atkins points to physicians who use BMI in adolescents over the age of 18 in determining likelihood of a disorder. "A healthy BMI does not mean someone has escaped an eating disorder," she says. "A disorder can affect your life long before you show deterioration."

Too often, health-care providers just don't know what to do.

Jody Whipple, RD, a dietitian who often works with athletes at Penn State, says that while disordered eating is different in every case, there are risk factors worth noting. "Family influence is huge, especially in adolescence," she says.

Part and parcel to this is parental modeling of healthy body image and taking a "no dieting" approach. "Family meals are an important place to exhibit this and communicate it," says Whipple. "If there is any history of disorder, it is especially important to put those glasses on and use them for prevention."

Personality type is another factor. "Perfectionists are going to be more prone to a disorder," says Whipple, "while a laid back personality that can see gray and is more flexible in his or her thinking will be more protected."

When it comes to outside influences, sports coaches can have an oversized role. "Coaches in many sports have unfortunately too often created toxic environments," says Whipple. "It's important that coaches emphasize success as a whole person rather than tying it into performance only."

This holds true especially in sports where weight is considered a performance factor. In many arenas, leaner is considered better, and when coaches can steer the conversation away from that, the athletes have improved odds at healthy body image.

Finally, there's the role of media, for better or worse. Unfortunately, there are plenty of social media influencers, as well as traditional media, who have linked exercise and restricted eating, with the wrong outcomes. "Information like that is not helpful to a 95-pound athlete looking to get faster," says Atkins.

On the other hand, responsible elites like Atkins and the Lane 9 athletes are using platforms like Twitter, Medium, and Instagram to effectively promote unrestricted eating. For its part, NEDA has launched a social media campaign for this week called Come as You Are. "Media can play a big part in influencing people one way or another," says Whipple. "It's important to steer vulnerable populations in the right direction here."

The good news is that there is a groundswell in the right direction and Atkins is encouraged by that: "As we talk more openly about eating disorders, we remove the shame and judgment."