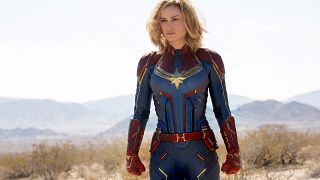 Rotten Tomatoes is fighting back against trolls.

The powerful movie review aggregation website announced Monday it would ban user commentsbefore a film premieres in theaters. The move is in part a bid to crack down on what it called "non-constructive input, sometimes bordering on trolling, which we believe is a disservice to our general readership." The service is also tweaking the system it uses to poll moviegoers about their interest in upcoming releases.

The move comes after some users apparently tried to torpedo the moviegoer interest percentage score for the not-yet-released "Captain Marvel," Marvel Studio's first female-led superhero movie. Rotten Tomatoes' webpage for the film, starring Brie Larson in the title role, had been swamped with negative comments, some of them misogynistic.

"Captain Marvel," slated to debut on March 8, was just the latest high-profile movie to come under attack by trolls. In recent years, a crush of users tried to sink audience scores for Marvel's "Black Panther,""Star Wars: The Last Jedi" and the female-led "Ghostbusters" reboot, deluging the site with comments that were sometimes racist or sexist.

The battle against "review bombing" is part of the company's push to make audience feedback more "useful," said Paul Yanover, the president of Fandango, the ticketing service that owns Rotten Tomatoes. (Fandango is a unit of NBCUniversal, the parent company of NBC News.)

"We decided the easiest thing to do, and the most intelligent thing to do, was simply removing the comments, because you can't comment on the film if you haven't seen the film," Yanover said.

The preemptively negative response to 2017's "Star Wars: The Last Jedi," the most diverse and inclusive entry in the sci-fi saga, was linked to a wider fan-driven backlash that many critics called toxic. Kelly Marie Tran, a Vietnamese-American actress who made her franchise debut in "The Last Jedi," wiped her social media accounts last year after months of misogynistic and racist harassment.

The release of Paul Feig's female-driven "Ghostbusters" reboot in 2016 was plagued by similar vitriol, culminating in a storm of racist and misogynistic online harassment against one of its stars, comedian Leslie Jones, who said at the time that she was "in a personal hell" over the abuse.

The power of the fresh tomato

The ratings on Rotten Tomatoes can play a decisive role in a movie's performance at the box office, and many Hollywood executives chafe against the site's influence on popular tastes. An anonymous top film executive told the New York Times in 2017 that he was determined to destroy the site.

"Rotten Tomatoes has really become a hallmark of whether a movie is good or bad, and that can quickly spread online and through word of mouth," said Jeff Bock, senior box-office analyst at Exhibitor Relations, an entertainment research firm.

The service has been accused of stripping nuance from film criticism with its Tomatometer, a barometer that reduces hundreds of professional reviews to simple "fresh" or "rotten" grades. The Beverly Hills-based company also took flak for what some described as a lack of diversity in its roster of critics, leading it to tweak its criteria to include more women and people of color.

In its blog post announcing the audience score policy change, Rotten Tomatoes said it would no longer display a so-called "Want to See" percentage score during a movie's pre-release period. It also said users will be able to make comments and rate a movie only after it is released in theaters.

"Don't worry," the site said," "fans will still get to have their say."