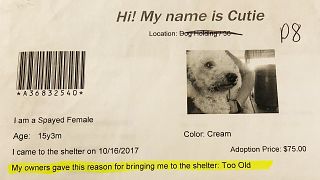 According to her surrender paperwork, Karlie the dog — previously named Cutie — was dropped off at a shelter for being "too old."   -   Copyright  Florida Little Dog Rescue
By Laura T. Coffey  with TODAY Lifestyle  •  Updated: 02/02/2019

Psssst ... don't tell Karlie the dog that she's old. She has NO idea.

The 16-year-old miniature poodle mix loves to zoom around and play, play and play some more. She's in peak physical condition — although that might not be the first thing you notice when you watch her on TV this weekend.

Despite being one of the stars of "Dog Bowl II" — a furry, four-legged version of the Super Bowl — Karlie was much more interested in kissing the humans on set than she was in chasing a football around.

"Yeah, this is a dog who cannot hold her licker," said Laurie Johnson, director of Florida Little Dog Rescue, the Orlando-area rescue group that whisked Karlie to safety from a shelter kennel. "She's a constant kisser, and she doesn't know a stranger. She loves everyone!"

Each year since 2005, Animal Planet has aired "Puppy Bowl" in concert with (and in hilarious imitation of) the Super Bowl. For the second year in a row, the network will also feature "Puppy Bowl Presents: The Dog Bowl" as a fun way to encourage the adoption of senior shelter animals, special-needs pets and hard-to-adopt breeds. The program is hosted by animal advocate Jill Rappaport, and will air this weekend, on Saturday and again on Super Bowl Sunday.

"To me, Karlie's story sums up what 'Dog Bowl' is all about," Rappaport told TODAY. "This little dog is so beautiful, but she was given up by her owners at 15 years and 3 months old ... literally when she should be having the most fun and enjoying her twilight years."

Johnson of Florida Little Dog Rescue confirmed that Karlie's previous owners wrote down this reason for giving her up: "too old."

"She spent about a month at the shelter, and everyone passed her by," Johnson said. "She started to shut down. She was depressed — she had been used to a home."

Johnson opted to take in Karlie — formerly named "Cutie" — as a foster dog, to give her relief from her shelter stay and help her find a permanent home. Karlie has thrived since leaving the shelter, but over the past 15 months, Johnson still hasn't found anyone who wants to adopt her.

"She's pretty much about as perfect as they come," Johnson said. "She's housebroken. She's trained. She walks on a leash. She wants to hang out with you all the time, but not in an obnoxious way ... Is she fine staying with me and our other dogs for the rest of her life? Sure. Would she rather be the center of someone's world? Yeah, she would."

All the dogs featured on both "Puppy Bowl" and "Dog Bowl" are up for adoption. To date, both shows have had 100 percent adoption rates. For that reason, Johnson and Rappaport are hopeful that Karlie's future is bright.

"The real win for these dogs, the real touchdown, is finding a home," said Rappaport, consulting producer for "Dog Bowl." "When you give an older dog a second chance at life, you're the one who gets the gift. They look at you every day like you're from heaven above — and you actually are when you take in a senior dog."

This year's "Dog Bowl" special also features an array of adorable dogs with special needs, including Anneliese, a three-legged beagle mix; Wilma, a partially blind Chihuahua; Audrey, a deaf Australian shepherd and border collie mix; Captain Will, a cute little Chihuahua and Shih Tzu mix with one eye; and Mr. Bojangles, a poodle and Shih Tzu mix, who is the first-ever wheelchair player in "Dog Bowl."

Mr. Bojangles arrived at the Animal Care Center of NYC shelter in February 2017 with a spinal injury that left him partially paralyzed. Linda Vetrano, founder and president of Posh Pets Rescue, decided to spring the little guy from the shelter and get him the back surgery and physical therapy he needed. He now has a custom wheelchair and a newfound zest for life.

"He got out on the gridiron and he was one of our stiffest competitors!" Rappaport said.

Altogether, 63 dogs from 15 states get divided into two teams — Team Goldies and Team Oldies — and are unleashed on the playing field, where furry fumbles ensue.