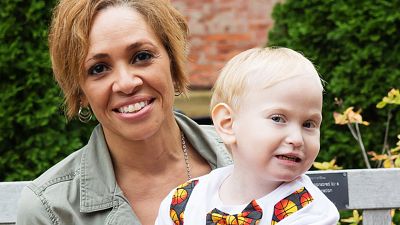 When foster mom Nicole Alles learned about a sick baby boy who needed a family, she knew she would give the newborn a home. But she would never have guessed she would end up giving him a kidney, and saving his life.

Alles got a call in December 2014 about the medically fragile child, whose birth parents were unable to care for him due to the severity of his condition. Alles and her husband, Justin, had been foster parents for years, and after several setbacks, Alles said they were about to call it quits.

Then they learned about baby Sebastian.

"The first thing they said was they couldn't find a home for him and, of course, that broke our hearts so we decided to take him," Alles told TODAY Parents.

Alles said Sebastian was overwhelmingly sick — born with two collapsed lungs, a non-functioning bladder, a non-working left kidney and a failing right one. Alles had to attend a lengthy training to learn how to care for the then 7-week-old infant.

In the Alles home, Sebastian began to thrive and soldiered through nearly 30 surgeries and procedures to correct the conditions he'd been born with.

"He's such a ray of sunshine," said Alles of the now 4-year-old. "It's hard to imagine some of the things he's gone through. You look at him and he looks like a normal child, but then you lift up his shirt and you see so many scars from all of his surgeries."

In 2016, the Alles family adopted Sebastian. Despite all the surgeries and medications to keep Sebastian alive, the child's remaining kidney continued to fail.

Never miss a parenting story — sign up for the TODAY Parents newsletter today!

Alles says she had a dream about donating one of her own kidneys to her son. Though the odds of being a match were slim, she began wading through his more than 5,000 pages of medical records in hope of finding a way to help Sebastian live.

Alles got tested to find out if she could donate a kidney to Sebastian. Usually, doctors told her, they preferred donors who were 30 years old or younger. But when tests revealed the 48-year-old mom was a match for her son, doctors at Indiana University Health University Hospital made an exception.

In October 2017, one year after adopting him, Alles donated one of her kidneys to Sebastian. The pair's surgeon, Dr. William Goggins, said he had never before performed a transplant in which an adoptive parent was a match for their adopted child.

"I've been in Indiana for 15 years and I've done 2,100 kidney transplants," said Goggins. "This is the first time I've seen anything like this. I look at the generosity of the mom and the love for the child — for a foster mom to be a match for her child and to be able to donate is super rare."

Goggins says getting an adult kidney into the abdomen of a child is "tricky."

"You have to create space in the child's abdomen," said Goggins. "When I talk to the parents before the surgery I explain to them that the incision will basically be along the entire side of their abdomen."

Goggins was able to perform the surgery and after a few weeks of recovery, Sebastian's health began to greatly improve.

"Maybe two months afterward, he started nibbling on food which was amazing because he'd never done that before," said Alles. Sebastian previously had relied exclusively on a feeding tube. "And now he eats and drinks. His favorite food is chicken nuggets and french fries."

When Sebastian turned 4 earlier this month, Alles made him a special birthday cake.

"He had never eaten cake before," said Alles, who has 4 adult biological children. "So I baked him a chocolate-chocolate chip Elmo cake and he loved it."

Alles said Sebastian was recently diagnosed with autism and still receives liquids from a G-tube.

"It's a long road," said Alles. "But slow and steady wins the race."

As she watches her son thrive, Alles said she feels "blessed and overwhelmed."

"God had a plan," she said. "I think about the bible verse Jeremiah 29:11. It says, 'For I know the plans I have for you, declares the Lord, plans to give you hope and a future.' That — a future — is definitely what Sebastian has now."

And, Goggins, who is African-American, said she now has a funny response to those who ask if Sebastian is her child, since he is white.