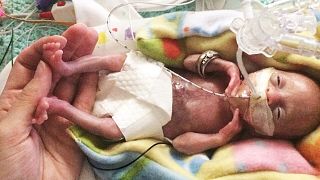 Baby Stensrud, believed to be the most premature surviving baby ever.   -   Copyright  Courtesy Courtney Stensrud
By A. Pawlowski  with TODAY Health and Wellness  •  Updated: 22/11/2018

The baby girl weighed less than a pound when she was born just 21 weeks into Courtney Stensrud's pregnancy. Infants that tiny and undeveloped aren't expected to survive outside the womb, but her mother insisted that she be resuscitated.

Lyla — who is now 4 — appears to have made medical history.

Her doctors believe the Texas girl is the most premature surviving baby ever reported. Her case means they can no longer say death is certain for babies delivered at 21 weeks' gestation, "though it remains highly probable," wrote Dr Kaashif Ahmad, a MEDNAX-affiliated neonatologist at the Pediatrix Medical Group of San Antonio, Texas, last year in the journal Pediatrics.

"I feel blessed that we were given this little miracle baby," Stensrud told TODAY when Lyla's story first went public in 2017.

When TODAY caught up with her on Thanksgiving Eve 2018, she had a lot to be thankful for. Lyla is a little behind on speech, but she's otherwise "doing really well" and doesn't have any medical issues or disabilities, her mom said. The girl will soon return to preschool and recently attended a NICU reunion at Methodist Children's Hospital.

Stensrud has started a blog to tell her daughter's story and reach other families who may be going through a similar situation.

Doctors can't predict Lyla's future, but they have every reason to be hopeful for her continued long-term good health, Ahmad noted.

"Lyla is a beautiful... wonderful little girl," he said. "Lyla not only fought and survived to make it home, but is thriving today. Knowing her over the past four years has been an extraordinary journey."

'I just absolutely thought she could survive'

The child's fate seemed much grimmer in 2014.

Stensrud, now 36, and Ahmad first met in the delivery room of a San Antonio hospital minutes after Stensrud gave birth. The 14.5-ounce baby — who was lying on her stomach still attached by the umbilical cord — was due in November, but it was only July. "It was shocking to see a living, breathing person that small," she recalled.

Stensrud went into early labour after experiencing premature rupture of membranes and chorioamnionitis, an infection of the placenta and the amniotic fluid. She had a few moments to research whether a baby born that early could live and knew it wasn't possible.

"But when I was holding a live baby in my arms, I just absolutely thought she could survive. I felt it in my heart," Stensrud said.

When Ahmad found out the pregnancy was estimated to be just 21 weeks and four days along, he quickly counselled her about the baby's dire prospects. Infants delivered before 22 weeks' gestation are too premature to survive, he said. Their lungs are so underdeveloped that it's near impossible to deliver oxygen into their bodies.

Even at 22 weeks, breathing tubes may not be small enough to fit into a preemie's airway and ventilators may not provide small enough breaths for their tiny lungs. The blood vessels in their brains are so fragile that they're prone to break and cause large bleeds into the brain, Ahmad said.

The possible consequences: cerebral palsy, difficulty walking or running, the loss of part or all of their vision and learning disabilities. They may face severe health problems for the rest of their lives.

Obstetric and pediatric societies recommend against trying to resuscitate such small infants, the Pediatrics paper explains. Such efforts "may be considered futile or not in the best interests of the child" because it's extremely rare for babies born this premature to survive without "significant" neurologic consequences, the American Academy of Pediatrics notes.

Stensrud needed to make a fast decision about her daughter's fate.

"As he was basically telling me there was nothing they could do, I said, 'Will you try?'" Stensrud said.

"My answer was, 'If you would like us to try then I'm absolutely happy to try'… knowing that there were no guarantees," Ahmad recalled.

After doctors clamped the baby's umbilical cord, he placed her under an overhead warmer to raise her body temperature and placed a breathing tube into her airway.

"From that point, she gradually responded. She turned pink. Within a few minutes, she began to make efforts to breathe and then she began to move," he recalled.

Lyla was whisked to the neonatal intensive care unit and spent about four months in the hospital. She finally came home three days before her original due date in November 2014.

Today, she's "she's happy, full of energy and full of life" and keeps right up with her 5-year-old brother, Stensrud said.

But people need to be very cautious about concluding from a single case that routinely resuscitating babies born in the 21st week of gestation is the best approach, Ahmad warned. Don't assume one positive outcome will be the outcome for other infants, he noted.

"At this time, resuscitating infants who are born in the 21st week of gestation is not standard practice anywhere in the world. Even for those infants born in the 22nd week of gestation, there continues to be significant disagreement regarding the best course of action due to the high mortality and substantial risks for long-term disability," Ahmad said.

Still, Stensrud said she feels hopeful other babies in a similar situation will be given a chance at life, like her daughter was. And she wants other parents to know survival is possible. Telling Lyla's story and giving hope to other families has become Stensrud's passion.

"The reason I'm doing these interviews — it's not for me, it's not for my daughter. It's for that mother in antepartum who is frantically searching online — that she will have a little bit of hope and faith that she can have the same outcome," she said.