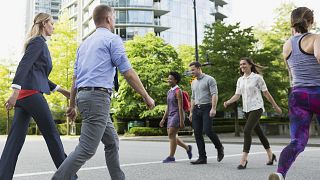 Walking down the sidewalk, you notice a person coming directly toward you. As you near each other, you realize you're going to collide.

You step to the right.

The other person steps to the left.

Now you're in each other's way — again. Then you shift to the left and she moves right and you're in a standoff. After moving back and forth, you finally stop and let her pass.

This phenomenon, a sidewalk dance of sorts, seems to happen all the time.

Why are people always stumbling into one another's path?

"It is definitely something that everyone has experienced," Brett Fajen, professor of cognitive science at Rensselaer Polytechnic Institute in Troy, New York, told TODAY. "For pedestrian behavior, the rules are implicit. It is unlike driving where there are explicit rules that people are supposed to know and follow."

Social norms determine pedestrian behavior, which breeds misunderstandings (er, missteps). In cultures where personal space isn't as important, people might walk closer to someone before swerving out of the way. In the U.S., people want loads of personal space and that influences how we stroll down the sidewalk.

"We tend to avoid collisions with other people by giving them a larger berth," said Fajen. "We give people more personal space than we would a telephone pole or an inanimate object."

How Americans drive also influences how they navigate sidewalks: In the U.S., people walk on the right and pass on the left, just like driving, but this differs in the United Kingdom, for example.

While the unspoken rules of social behavior dictate walking, there's a more pressing reason why people perform sidewalk dance: We don't want to get hurt.

"We all face the same problems: We are trying to get to a location and not run into anything," William Warren, a professor in the department of cognitive, linguistics and psychological sciences at Brown University in Providence, Rhode Island, told TODAY. "There is a pretty high cost to running into somebody. From a very young age we adopt strategies to avoid a collision."

How do we avoid the sidewalk shuffle?

Avoiding bumping into something or someone isn't straightforward. Warren tried recreating these conditions in a lab and couldn't replicate it. The experts suspect that during these sidewalk encounters we try to correct our direction subconsciously and end up mirroring each other.

"Once in a while, by chance, we both move in the same direction," Warren said. "It takes us a while to adjust and if by chance we both go the opposite direction we are locked in this oscillation."

This happens because of a lag in response time. Pedestrians see that they're going to bump into someone, but it takes a beat to change directions. In that moment, the other person tries adjusting, too, but he doesn't understand where the other is going. This causes people to step in the same direction.

"We only have intermittent opportunities to change our direction," Fajen said. "If you side step to your right and I side step to my left, I will see it and I won't be able to do something right away."

While the experts don't think people can always avoid sidewalk dancing, they agree that understanding how people act in crowds can increase safety.

"There are a number of famous examples of people getting crushed at rock concerts or in large crowds. If you put thousands of people together and see how they behave, we would avoid those sorts of disasters," Warren said. "Walking is something we are doing every day for hours and we take it for granted."