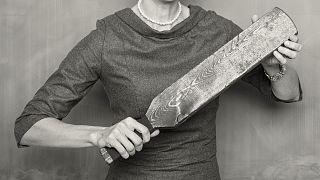 A vintage teacher is ready to assert some discipline on your behind with a bum paddle. Stay in line.   -   Copyright  Getty Images stock
By Meghan Holohan  with TODAY Lifestyle  •  Updated: 12/09/2018

Last week, the Georgia School for Innovation and the Classics sent students home with a form that caused some to balk. The charter kindergarten through ninth grade Christian school asked parents to give the school permission to paddle misbehaving children.

"In this school, we take discipline very seriously," superintendent Jody Boulineau told Augusta, Georgia's WRDW. The school did not respond to TODAY's requests for an interview or statement.

She said that 100 parents returned the form and about a third of them gave permission for paddling. According to WRDW, the form reads: "A student will be taken into an office behind closed doors. The student will place their hands on their knees or piece of furniture and will be struck on the buttocks with a paddle."

The punishment will not exceed three swats from a paddle, which is 24-inches in length, ¾ inches thick and six inches wide. If parents do not want their children to be paddled, the child will instead be suspended for five days.

This makes it difficult for parents to reject the corporal punishment, which research has found simply does not work, she said. Several organizations, including the American Academy of Pediatrics (AAP), do not support its use. AAP's position paper, in part, states:

"Corporal punishment may affect adversely a student's self-image and school achievement and that it may contribute to disruptive and violent student behavior. Alternative methods of behavioral management have proved more effective than corporal punishment."

After being paddled or spanked, students often stop acting badly for a few days afterward because they are afraid. But it doesn't help them understand how to behave.

"The child is humiliated and angry and the bad behavior can escalate," Dr. Robert Sege, a spokesperson for AAP and head of the Child Protection Program at Floating Hospital for Children in Boston, told TODAY. "Corporal punishment is humiliating and is designed to be humiliating and that does not help a child develop their own sense of right and wrong and how they should behave."

"Physical punishment against kid overall doesn't impact their behavior for the better. It does tend to make them more fearful of the adults in their lives and more aggressive toward each other as they see violence a way to deal," Gilboa said.

While use of corporal punishment has been decreasing nationwide, 20 states still allow it. Sege said when AAP first released its statement against it in 2000, schools used corporal punishment nearly two million times a year. In 2014-2015, that number dipped to 160,000 times.

"I've heard 'Great, it's about time, 'We're so glad that this is happening again, they should've never taken it out of schools,'" she said.

Sege believes that supporters of corporal punishment overstate its popularity and said that surveys show most American parents are not in favor of it. And, research proves that other forms of punishment are more effective at changing bad habits into good ones.

"There are better ways of behavior management that do not undermine student success at school," he said.