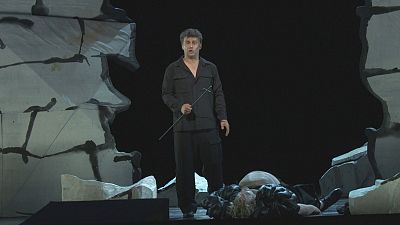 Wagner's last opera, Parsifal, is a philosophical and mystical journey unlike any other, revolving around the saga of the Holy Grail. A new, sombre production opened the Munich Opera Festival at the Bavarian State Opera, designed by the legendary German artist Georg Baselitz and with a superb cast led by Nina Stemme, René Pape and Jonas Kaufmann who embodies the "pure hero" Parsifal.

"Parsifal is a fundamentally intense piece," says tenor Jonas Kaufman. "For me it is Wagner's most accomplished work in the sense that for the first time the story is not just about history, heroes and sagas of gods and love, but here it deals with religion, whatever religion it might be, about desire, suffering and redemption."

Bass René Pape also cites the importance of the opera's universal themes: "Wagner has also enriched his mind with Buddhism and other religions. I don't think we can define it as a Christian religion, it is more universal. Every human who believes in something will relate to Parsifal."

For Swedish soprano Nine Stemme the opera's effect on performers and the audience is almost transendental: "It takes you to different worlds. It’s enigmatic at the same time. It’s beautiful, it is pointing towards the future from Wagner’s point of view, so to say and it also points backwards in history."

Wagner's masterpiece premiered in 1882. It tells the tale of Parsifal who is destined to save a brotherhood of knights charged with guarding the relics of Christ’s last days. His encounter with the conflicted temptress Kundry has a deep impact on both.

"During the scene things also start to happen with Kundry when she understands who this Parsifal is or might be, says Stemme. "So she actually falls in love with him as woman not as a the seductress. Through this kiss something extremely clear arises in him. He foresees his future, he knows his mission and he senses that he could be somebody who changes everything."

Kaufman says the immense power of Parsifal, like much of Wagner's work reveals itself slowly: "Wagner in general, it's said, takes some time to get into the music, but when the big picture becomes clear and it begins to resonate it becomes an addiction and you can't get away from it. You really forget space and time."

The Munich Opera Festival runs till July 31 and the next performances of Parsifal are on July 31, March 24/ 28/31, 2019. The Bavarian State Opera was voted 'best company' at the 2018 International Opera Awards .