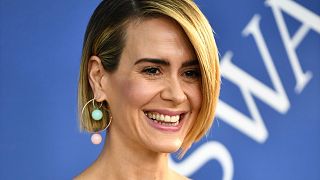 The decision to have kids is, for many, is one of the biggest choices in life — and celebrities aren't exempt.

Recently, 'Ocean's 8' star Sarah Paulson announced that she froze her eggs, revealing she's not sure whether or not she wanted to have children.

"I love kids, but I'm very impulsive, and I was afraid that I would have children and then regret it," the actress told the British publication, the Sunday Times. "But that's not something I feel entirely confident about either, because I might regret not having them, too. So I froze my eggs, just in case."

Paulson, 42, is in a relationship with 74-year-old actress Holland Taylor.

She's one of a growing number of women electing to undergo the crypopreservation procedure, in which a woman takes hormones to produce excess eggs that are then harvested and stored for years until she's ready to start a family.

"What [the doctor] told me gives me enough information to be a little bit more proactive in a way that frankly may have changed my life, and so now I can be the author of my own story," she said.

Some women find that having eggs frozen can be freeing. One woman who lives in Los Angeles, told TODAY that freezing her eggs ultimately took the pressure off of dating. Others say it gives them time to pursue their careers.

The process does have it drawbacks though. In addition to the procedure being expensive (it can cost more than $10,000), some women must undergo multiple rounds to obtain enough eggs for successful implantation. And even then, there are no guarantees.

Eggs can be damaged once they are thawed, or even damaged in storage. One facility in Cleveland, Ohio, had a major equipment malfunction that resulted in the loss of 2,100 frozen eggs and embryos.

Ultimately, women who have gone through the journey say that talking to other women is helpful in making the decision. They also encourage women to talk to a medical professional and weigh their pros and cons.