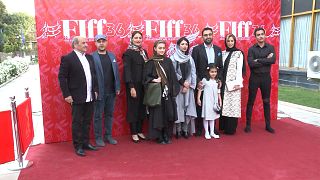 The International Film Festival in Tehran is one of the most important cinema events in the Middle East.

Recently it has opened up, with more international films, filmmakers and guests invited.

Of course, freedom of expression remains sensitive in Iran, with feature films and documentaries having to pass tight censorship.

Having made many films about his country's past under the Khmer Rouge, we asked Cambodian director Rithy Panh about the importance of Iran giving its filmmakers more freedom to talk about the past and present there.

"It is vital to come to terms with the past," he told Euronews.

"I already have Cambodia. That is huge as an area to work on so I will leave it to the Iranians to think about reflecting on their own history."

The fate of Iranian filmmakers?

VIP guest, veteran US filmmaker Oliver Stone, spoke about Iran's firm attitude to dissident director Jafar Panahi, who has been invited to the Cannes Film Festival but is banned from going there.

"They (Iran) have of kinds of problems here. They are not running away from anything. They are very realistic," he told our correspondent Wolfgang Spindler.

"I know there is one film director... but at least he got the film made and he is in Cannes Film Festival. They may not let him go but he got the film made. That's the big thing. It's probably better for him to get banned from travelling. You understand what I am saying?"

The Oscar-nominated director was honoured for his long cinematic career and focus on humanitarian issues. The award is significant because Panh has examined his country's past in a way an Iranian filmmaker could not do.

The Best Actress Award went to Iranian Mahoor Alvand, for playing a much older woman in Ramtin Lavafipour's film 'Hattrick', about the perception of how people change.

"We had different rehearsals with the director, reading the script and talking about it," she said.

"We talked about all the details, her past and future, and I think the history they created for me helped me so much to get the right feel of the role."

Director Hanna Slak collected the 'Best Actor' award on behalf of Croatian Leon Lucev, rewarded for playing a miner in her Slovenian film.

"The Miner" is about a man who discovers thousands of bodies of people executed during World War II in an abandoned mine. His employer pressures him to keep quiet.

Director Milko Lazarov and producer Veselka Kiryakova picked up the 'Best Film' award for 'Aga', their portrayal of an elderly couple holding onto their traditions in the frozen wastes of Yakutia in northeastern Siberia.

The melancholy story is set in the northern hemisphere’s coldest climate, with a fixed camera view of the couple in their harsh, icy reality

"I have loved those kind of stories about the north since I was a child. Probably it's related," Lazarov explained.

"I love to shoot that kind of silent movie, like slow movies and that's the perfect place for shooting, in Siberia."

"This festival has all the ingredients an international festival needs -  a very rich programme, a lot of international guests, there is a film market, there are a lot of workshops," our correspondent Wolfgang Spindler concluded.

"And the fact that Oliver Stone could attend the festival! Ten years ago, this just would not have been possible. There is a wind of change!"