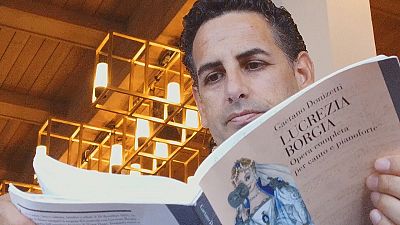 It’s one of the more glamorous highlights of this year’s Salzburg Festival: Donizetti’s masterpiece “Lucrezia Borgia”.

On stage a stellar cast with the bel canto tenor of our time: Juan Diego Flórez.

At the pinnacle of his career, he mesmerised in his role debut.

I’ve had an amazing time singing Donizetti’s Lucrezia Borgia at the #SalzburgFestival!

Flórez cited his operatic idol as an influence in his decision to take on the role: “I always wanted to sing Lucrezia Borgia, the role of Gennaro also because my idol Alfredo Kraus used to sing it. There is a recording of him. Even if it’s my debut I practically knew the opera because of listening to this recording.”

Performing the opera in concert format, as opposed to a traditional performance, allows the singers to focus solely on the pure music, without have to worry about acting at the same time.

Where, on an ordinary night at the opera, you would be treated to a feast for the eyes and the ears, in concert the audience will have solely the latter for entertainment.

Not to take anything away from the incredible skill on display during this recital. As Flórez puts it, “bel canto is all about the voice”.

The Peruvian tenor said: “You can concentrate on the singing and in bel canto especially it is enjoyable, it is the showcase of the singing voice in a very virtuoso way. In a concert version you can really enjoy it.”

The melodramatic opera which premiered at La Scala in 1833 is based on a play by Victor Hugo. A vindictive Lucrezia accidentally poisons her long-lost son.

A tale based on the real-life daughter of Pope Alexander VI, who has been cast as a femme fatale throughout history in works of art and literature, Lucrezia Borgia is a story of mistaken identity, revenge and death.

The term first appeared in the 18th and early 19th century scores of composers such as George Frideric Handel and Gioachino Rossini but is now used nostalgically to describe a manner of singing that had begun to wane around 1830.

According to renowned soprano Krassimira Stoyanova, the style does not simply mean to produce “tones or sounds”.

“Bel canto stands for beautiful singing,” she said. “That implies a high quality of the voice and the right technique and the correct phrasing.”

For Flórez it means the ability to stray from the score.

He said: “In Belcanto you can flourish a cadence.

“Flourishing also means to add high notes for example and in the end of the arias stay in the high note with the orchestra playing loud, loud, loud and then finish it.”