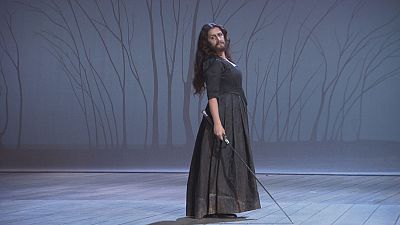 It’s unsettling and transgressive: Cecilia Bartoli surprises yet again as she slips under the skin of Ariodante, the eponymous hero of an opera by George Frideric Handel (1685 – 1759). The production was a first for Salzburg, where it appeared on the programme of the Whitsun festival, and where it will appear again this summer.

“For me, it’s a role debut, a transvestite role,” explains Bartoli. “I sang transvestite roles when I was very young, I was Mozart’s Cherubino of course, then I sang another transvestite role in a Rossini opera, too. But I thought that showing some masculinity here was a bit of a challenge, a challenge worth taking up, because Ariodante is a beautiful work. It’s Handel at his best. I think he was in a state of grace when he wrote Ariodante.”

Composed between August and October 1734, Ariodante helped to relaunch Handel’s career in London. In its original version, the title role was sung by a famous castrato, Giovanni Carestini.

“Handel first heard Ariodante in Florence in 1708, I think, and so it was something that he had in mind for a long time,” explains conductor, Gianluca Capuano. He first put on his own version in the 1730s, at a time of personal crisis after he had been separated from his opera company.

Based on a libretto by Antonio Salvi, the opera tells the story of young Ariodante, who is to marry the King of Scotland’s daughter, Ginevra. A jealous nobleman, Duke Polinesso, convinces him by means of a trick that Ginevra has been unfaithful: he becomes suicidal and Ginevra is condemned and imprisoned. However, after a dual with Ariodante’s brother, Polinesso confesses what he has done, and the couple are joyfully reunited.

The work premiered on 8 January 1735 in the newly founded Covent Garden Opera House in London. It had a run of eleven performances, a mark of modest success at the time, but was only briefly taken up again in 1736. It wasn’t until 1928 that Ariodante was resurrected, and it took Janet Baker’s 1964 interpretation of the title role to bring the opera into the modern repertoire.

The Shakespeare of music

For Gianluca Capuano, Ariodante is one of Handel’s most mature operas. “I consider Handel to be the Shakespeare of music. He really masters the musical language in a way that mirrors the characters’ psychology. This way, he reaches, through music, the characters’ deepest soul, which is quite rare in his repertoire.”

The staging by Christof Loy explores class tensions through the prism of love and thirst for power. He was in part inspired by Orlando, Virginia Woolf’s novel, in which her androgynous protagonist changes gender over the course of four centuries.

“In Ariodante’s case, he first appears as a young man – so we see Cecilia dressed as a young man, and as events unfurl in the opera, she / he gradually turns back into a woman by the end. We tried to adjust the music a little bit to suit that transformation, playing the masculine melodies in a more masculine way, so to speak, and the feminine scores at the end a little more softly, a little more smoothly.”

A masterpiece of taste and inspiration – #Ariodante, directed by Christoph Loy pic.twitter.com/AITAgiykL8

Despite her character’s mutations, Cecilia Bartoli remains convincing from beginning to end. “It’s an actor’s role … you need to maintain your stamina till the end. It’s a long role, vocally it’s difficult,” she admits.

“We laugh with Ariodante, we suffer, we cry with Ariodante,” explains Cecilia Bartoli. “It’s a journey. It’s rare to have such a comprehensive role.”

Ariodante provides the opportunity for Cecilia Bartoli to show off the virtuosity of her Musiciens du Prince, the Baroque ensemble that she created a year ago with the financial support of the Principality of Monaco. “All the grand courts of the eighteenth century had an orchestra,” she explains. “So I said to myself: it would be great to find a court, in Europe, that wanted an orchestra that played on period instruments. Finally I settled upon Monaco: I had the great privilege of meeting Prince Albert and Princess Caroline and they were immediately enthusiastic!”

Ariodante also features on the bill of the Salzburg Summer Festival, where it will be performed between 16 and 28 August. The festival runs from 21 July to 30 August.