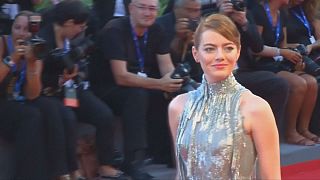 The Academy Awards take place on Sunday February 26th and one of the most hotly anticipated categories is that of Best Actress.

Isabelle Huppert won the Golden Globe for Best Actress in a Drama this year, and is nominated for Actress in a Leading Role for her turn in Paul Verhoeven’s “Elle”, about a woman out for revenge after being raped.

This is Huppert’s first Oscar nomination, despite coming close for “The Lacemaker” and “Heaven’s Gate” in more than 40 years of starring roles.

“When a role is so great and when the director has such an accurate insight in what he does you don’t need to be helped in any way, you are just carried away with, you know, day by day, frame by frame, camera movement by camera movement, all the questions that you could have are being answered by the brilliant direction,” says Huppert.

Emma Stone has not only already won a Golden Globe for “La La Land” but also pocketed the Screen Actors Guild award for Best Actress.

Stone is nominated for her portrayal of Mia, an aspiring actress who juggles her love for a jazz pianist with her attempts to find her own path to success.

This is Stone’s second Oscar nomination after being previously nominated for a supporting role Oscar for 2014’s “Birdman.”

Irish actress Ruth Negga, currently co-starring with her real-life partner Dominic Cooper in TV’s “Preacher” is one of the new names this year for her role in “Loving”. Negga portrays Mildred, an African-American woman whose love for Richard, her white husband, winds up changing laws prohibiting interracial marriages in the United States

This is the first Academy Award nomination for Ruth Negga.

“What’s important is that people see this film and I think maybe if you have an Oscar nomination the hope is that you will get access to more work or you’ll be on the minds of people. It won’t be about kicking a door down, it will be about opening it gently,” she says.

It seems no academy awards ceremony is truly complete without Meryl Streep, and her “Florence Foster Jenkins” – the true story of a New York heiress who aspired to be an opera singer, but who had a terrible singing voice, has been nominated, Streep’s 20th. She has won three times, for “Kramer versus Kramer”, “Sophie’s Choice”, and “The Iron Lady.

“In all the characters I’ve played, I don’t think, except maybe for Julia Child, I’ve ever played anybody with so much joie de vivre,” she explained. “But she had real, unlike that character, she had real challenges in her life physically, and in terms of her husband’s philandering, but she just soldiered on in spite of it all and that was very touching to me. She wasn’t in anguish in her life. She was protected from the truth by her husband and she lived a happy life I think,” says Streep.

Natalie Portman rounds off the five nominees for her role in “Jackie” about John F. Kennedy’s wife after he was assassinated.

This is her third Academy Award nomination. She was previously nominated for
“Black Swan”, which won her the Oscar, and the supporting role nomination for “Closer”.

Speaking at the premiere in Los Angeles, she explained her admiration for the iconic character, saying “I was very impressed by how she was able to, even in a very difficult private moment, understand the importance of her image to an entire nation and make choices that would help a nation, not just her own private grief that she was going through.”

Last year’s winner was Brie Larson for the film “Room”.