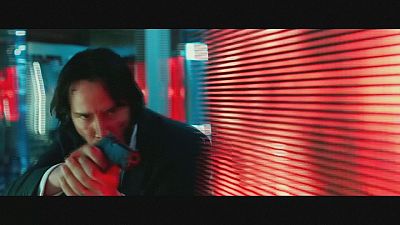 John Wick a hitman in the form of Keanu Reeves is back in a noir action thriller.

The film sees Wick come out of retirement to honour a blood oath.

Reeves gets together with some old friends from the ‘Matrix’ trilogy to make the John Wick 2: “It’s very rare and to come together with artists that you worked with and created friendships with and then to go on another artistic endeavor … it’s been, it was really special to work with Lawrence again and was great to work with Chad and his vision of ‘John Wick.’ Yeah, just one of the best experiences of my life,”
said Reeves.

Fishburne agrees: “You know, I mean we spent probably like five or seven years making those movies together. So and we remained friends over the years. So yeah!”

The Boogeyman and his dog walk into a hotel… See what happens next in #JohnWick2 – Hitting theaters February 10. pic.twitter.com/ojlEuFHdWg

The film is on worldwide release this month.