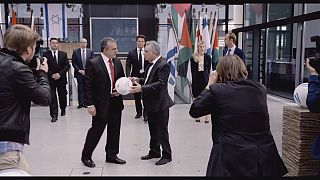 The prime Minister of Israel and the chairman of the Palestinian Authority decide there is only one logical way to resolve the longest running conflict in modern history: a soccer match.

The premise of soccer for peace is behind this German / Israeli mockumentary that proposes a solution to end the Israeli-Palestinian conflict. A soccer match between the Israeli national team and the Palestinian team is to bring peace to the region at last. The winners get the land, the losers have to leave, once and for all.

A stadium in Portugal is selected as a neutral location for the game; the coach for the Israeli team is a German. The teams are forged into political ambassadors; the soccer official for the Palestinians is played by Palestinian actor Norman Issa, while the Israeli official is played by Moroccan-born Israeli actor Moshe Ivgy. Both men are mega-stars in Israel.

This is high political satire, but is entirely filmed as if it were a documentary. Nobody is spared as the mess is laid out before the fictitious film crew’s camera: argumentative Israelis and Palestinians as well as clueless Western Europeans and the international soccer federation.

This hilarious and absurd film with its original German title “90 Minutes and at the final whistle peace” is now out in German cinemas.