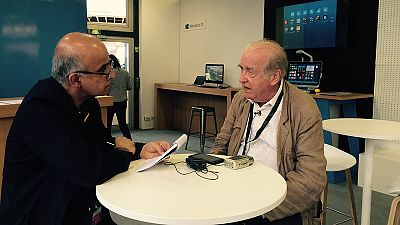 In this abridged version of a longer conversation during the 68th Cannes Film Festival, we cover a broad range of topics from the different approaches to film criticism at Cahiers du Cinéma and Positif, his views on Stanley Kubrick and other great directors, the American independent cinema and film criticism in the age of the internet.

Could you please talk about Positif and your engagement with the journal. What was the main difference between Cahiers du cinema and Positif regarding their approach towards cinema?

Sometime the same directors were supported by both magazines like Nanni Moretti but sometimes we like people such as Theo Angelopoulos that Cahiers du cinema didn’t like. Cahiers likes Naomi Kawase but we don’t like Kawase but if you take all these people over the last 60 years, the complete history of cinema, there are very few good directors that have not been supported either by Cahiers or Positif. So the two magazines were supported the best directors in the world.

What important factor in the history of Positif is the contribution of numbers of critics who were part of the surrealist movement, the famous surrealist movement in France. And there were people in Positif like Robert Benayoun, Gérard Legrand, like Ado Kyrou, all these people that Farrokh Ghaffari (the veteran Iranian filmmaker an film critic at Positif) knew very well, were surrealist and Positif as always given big importance to the world of imagination, the world of fantasy. We have supported Kubrick, Polanski, Fellini, Tarkovski, Tim Burton, Alain Resnais, Buñuel, all these directors prefer the world of imagination, the world of dreams, and the rebellion also.

I think this is the most important difference between Cahiers and Positif.

When you say that you were fascinated by the world of imagination, does it mean that you were indifferent toward realism in cinema?

Cahiers was more like the Lumière brothers. They were for realism. Positif also likes realism, we like Kiarostami, we loved Maurice Pialat, we loved Renoir, so it doesn’t mean that we don’t like realism but also we were really attracted by the world of imagination, the world of the great imaginary directors.

And it’s more difficult to accept the world of imagination than the world of realism, because everybody understands reality. If you do Bicycle Thieves, or Where is My Friend’s House by Kiarostami or Rosselini or Renoir, when you look at the film like The 400 Blows by Truffaut, you say oh this is marvelous, this is life but if you go inside the head of the person and his dreams and obsessions, it is much more difficult to accept because everybody has his own imagination. The reality is there but imagination is inside everybody, inside each person and it’s why the great directors like Kubrick, Bunuel, Polanski and Fellini and Tarkovski, they all created a lot of hostility. Sometimes they had lots of supporters but also had lots of enemies because people did not understand.

If you take for instance 1959 in Cannes there was The 400 Blows by Truffaut and there was Hiroshima Mon Amour by Alain Resnais. Everybody loved The 400 Blows, it was about a child, his mother, his school and so on, everybody said it’s great but Resnais’s film divided people whereas Truffaut was accepted, some people said it’s a masterpiece and some people said it is awful.

It was much easier to accept The 400 Blows rather than to accept the revolutionary style of Hiroshima Mon Amour.

The 400 Blows wasn’t revolutionary at all. Truffaut was a classic director, he was a good director but he was more easily accepted than the world of imagination.

In the 70s you systematically supported the American independent filmmakers such as Robert Altman, Kubrick, Sydney Polack and De Palma. What was interesting for you in that cinema?

Positif was a leftist magazine but we were not blind to the talent of people. At that time there was the Vietnam War and a lot of film critics didn’t like America and the American cinema because of the Vietnam War but we made a distinction between cinema and politics. Filmmakers like Scorsese, Altman, Terrence Malick, De Palma, all these people, they were not supporting the Vietnam War, it’s like the French New Wave that came at the time of Algerian war, and everybody accepted the New Wave. We can’t say oh no, we don’t like the French films because they kill Algerians. So a lot of magazines like Cahiers loved Chinese films because they were Maoist and they loved Mao Tse-tung.

They didn’t like the early American revolutionary films. I don’t understand that. I think we should separate politics from cinema.

What do you think about today’s American independent cinema?

There is no more independent cinema. Now most of the people in America who make independent films they dream of going to Hollywood. When 30 years ago when Soderbergh made Sex, Lies and Videotape and when Scorsese made Mean Street and when the Coen Brothers’ made Blood Simple and Terrence Malick made Badlands, these films were really truly independent films and they did not look to become Hollywood directors but today everybody wants to go to Hollywood.

You have always admired Stanley Kubrick and you had a wonderful conversation with him. How did you approach Kubrick?

The problem is that Kubrick was a genius and I never saw a bad Stanley Kubrick movie.

When I saw the Shining, people said that oh you like the Shinning because you are just publishing a book about Kubrick and you feel that you have to like the Shining and now the Shining is a classic film. At the time it was discussed and some people didn’t like it. All the films by Kubrick created controversy but finally twenty, thirty years later they are admired. The American film critics hated Barry Lyndon. They thought that it was terrible but it was a masterpiece. It takes time to admit, to acknowledge Kubrick’s talent because he was such a revolutionary filmmaker.

I’m sure there are very good film critics on the internet. The problem is that there are so many many many film blogs and I don’t know which one to look at or to choose.

I would like a Michelin Guides, a book for restaurants. I would like people to tell me which good internet programme exists.