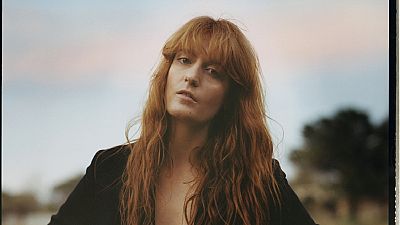 Seeing Florence + The Machine on stage at Nuits de Fourvière in Lyon on Sunday night was like meeting an old friend refreshed and inspired after returning from a long journey.

“Romantic” is probably the best way to describe Florence Welch’s first appearance on stage in front of a French audience. Wearing a simple cotton blouse and her hair loose, she followed her musicans calmly onto the stage, carrying a bunch of roses.  The flowers were, one by one, thrown into to her fans- a little gift for those who arrived early despite temperatures of up to 40 degrees.

Starting the set with “What water gave me”,  you could really imagine Florence was entering those generous and mystic waters which were the main inspiration for the band’s previous album “Ceremonials”.  The audience was certainly caught in up in the flow.

Florence and the machine #NuitsDeFourviere#Lyon it was a great night she's AWSOMEpic.twitter.com/5d5uarA1Qv

Florence + The Machine is touring to promote their new album, the first in three years, which was released officially just a over a month ago. We remained at sea as we were treated to the first single from the new CD “Ship to wreck”.

Attempting to speak French, Florence invited the public to sing along, but struggled with her grammar and called on the linguistic skills of a backing singer, which touched many hearts.

“Any bus that travels with us could fit in such a wonderful choir that I see in front of me in this amphitheater”, Welch told the crowd.  And cheered by her comments, the audience rose up for “Shake it out” with Florence conducting the crowd as they sing along.

The sun set over Fourvière hill just as Florence played “Cosmic Love” followed by Neil’s Young “Only love can break your heart”, a surprise gift for the twilight hour.  Just as the audience started to tire of participating in the choir, there was a huge energy boost from the stage.

In French, Florence announces the title track of the new album “C’est grand, c’est bleu, c’est magnifique.“
“Suddenly I’m overcome…” she sings, passing this sense of peace and triumph, supported by a strong trumpets section in “Queen of peace”. “It’s more here and now,” – Florence said of her new album in an earlier interview with Zane Lowe. “It’s about learn how to live, how to love.”

Someone in the audience threw a comfort cushion towards the stage.  The cushions are handed out to the crowd who sit for hours on the ancient amphitheatre’s harsh stone.  This quickly descended into a cushion shower.  Florence too participated, sending cushions back into the crowd while singing “You hit me once, I hit you back”, ending the night with one of her oldest tracks.