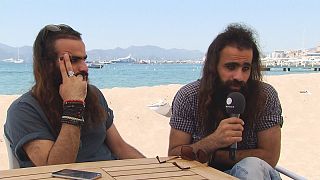 Presented at The International Critics Week at the Cannes Film Festival ‘Dégradé’
by the Palestinian twins Tarzan and Arab Nasser is set in a hair salon in Gaza where thirteen trapped women chat, argue and eventually boil over.

His brother Arab Nasser answers the question:“It is the situation we decided to talk about, life in general. We as Palestinians need to export it, to show our lives to others, my brother believes there is a big misunderstanding about our lives.”

The cast mixes some of the best known actors in the Arab world with a number of unknown performers.

Hiam Abbas, starred in ‘The Visitor’ and ‘Exodus’:
“I was very interested in this story. I read it and thought how will they turn a months filming into a day in the life of thirteen women, It is not easy to do, but it is something really very beautiful and very rewarding.”

This is a rare opportunity to see Gaza beyond the violence where the camera lens provides a clearer picture of the reality of life in the Gaza Strip.