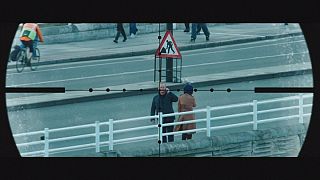 BBC spy series “Spooks” has made the transition to the big screen as is increasingly the way with successful TV series, and brings together original cast members with some new faces.

They include “Game of Thrones” Kit Harington.

That claim may be mocked by critics of the show who maintained it was a fantasy and bore no resemblance to the real world of espionage, but Sir Harry Pearce, as usual played by Peter Firth, is faced with a very real and British problem – a traitor at the heart of MI5, which since Kim Philby fled to Moscow has been a constant theme of the genre. Tough choices abound. in this opaque world.

“Well, yes, that’s the morally ambiguous grey area that security services – particularly ones in the operational field live within. They live in that. They have to make those decisions and the clue’s in the title really – ‘Spooks: The Greater Good’ – how much is allowable to prevent something worse. Is it okay to kill one person to prevent the deaths of several,” says Firth.

The long-running TV series was a hit with British and foreign audiences, so the filmmakers will be hoping those audiences turn out for the widescreen version.