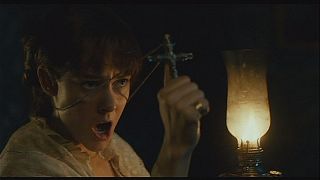 Based on the novel of the same name by Arthur Phillips, ‘Angelica’ tells the story of an emotionally fragile woman, who nearly dies giving birth to her daughter Angelica and is ordered to practice abstinence.

But before long her bid to suppress her desires gives birth to demons, that appear in poltergeist form terrorizing her husband and child.

Jena Malone, who plays the central character, explains that the movie is somewhat a critique of Victorian attitudes to female sexuality.

“I love that it starts as this very typical English costume drama about a young couple falling in love and it takes so many twists and turns. Not only is it a story about love but it is also the layers of the story. Examining the truth of female hysteria at the time, sexual repression versus sexual want, knowing that a woman basically knew more about her dressing patterns than she did about her own interior body,” she says.

‘Angelica’ has been described as a sensual delight, thanks to the imaginative interiors, complemented by the startling fantasy Victorian costumes and the film’s beautiful score.

Malone explains how her relationship with her costumes had a profound impact on her performance.

Jena Malone has been unanimously praised for her performance in ‘Angelica’, which has otherwise received mixed reviews, with one critic describing it as a loony psychosexual potboiler, while others didn’t find it effective as a horror film.

Screened as part of the Berlin Film Festival, ‘Angelica’ will be on global release later this year.