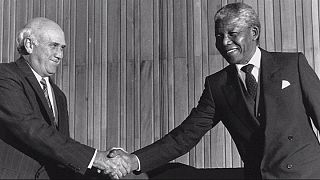 Most people associate the end of apartheid in South Africa with the iconic figure of Nelson Mandela.

But the man who presided over his country’s historic transition from white minority rule to fully participative democracy, thereby effectively ending his own rule, remains little known, even among his own countrymen.

In his documentary ‘The Other Man’, Swiss-born American filmmaker Nicolas Rossier aims to redress the imbalance and tell the story of former South African President F.W. de Klerk.

“There’s Mandela and there are always photos of de Klerk and Mandela, but every time there is a story on Mandela, de Klerk comes one or two minutes in the whole program. I said, well why? I would like to understand what really happened with this guy?,” he explains.

“There was basically an opportunity and I think de Klerk seized it. But what was interesting is nobody knew his background, nobody knew where he came from.”

Mandela and de Klerk shared the 1993 Nobel Peace Prize for ending minority white rule and laying the foundations of democracy. De Klerk served as one of two deputy presidents in Mandela’s government after the African National Congress won the 1994 elections.

“I think the film is a good anchor for debates about racism and the legacy of apartheid, and also the legacy we have here that we don’t really talk about. So, in a sense, I think it’s going to be a film that many people are going to watch over and over, not just from a conflict resolution perspective, but also because of, you know, the racism in our society,” says Nicolas Rossier.

While the documentary has opened to mixed reviews in the United States, it is undeniably a story that needed to be told for reasons of balance aloneabout a man who, in some ways, has been overlooked by history.

‘The Other Man’ is scheduled for release in South Africa this summer.