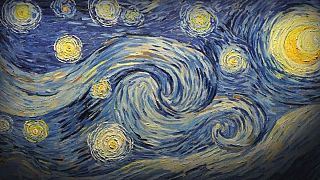 A team of Oscar-winning producers is working on a film about the life and death of Vincent Van Gogh.

Entitled ‘Loving Vincent’, it’s a feature-length hand-painted animation based on hundreds of paintings and letters by the artist.

Herself a painter, the film’s director Dorota Kobiela says she was inspired by the artist’s own words: “In one of his letters to his brother, he said ‘We can only speak through our paintings’. And these words were very important for me and they were actually the reason we are making this film like that. So we are telling the story of the artist by his art.”

Inspired by Van Gogh’s unique style, artists hired for the project will have to hand-paint close to 57,000 frames.

Finding the right people for the job was a challenge. Producers chose Polish artists with the right set of skills.

“We will require fifty to sixty painters on this film and each of those painters needs to be able to paint to an incredibly high level,” says the film’s producer, Hugh Welchman.

Best known for its multi-award winning short animation ‘Peter & the Wolf’ which won an Oscar in 2008, production company Breakthru Films expects the project to take around two years to complete.

All the paintings are oil on canvas to get the original van Gogh look. The animation is shot in the highest possible resolution.

“The animator uses material and paint based on a projected picture, covering the previous image with the displayed image. When the painting is ready, a photograph is taken and the process starts over again. After twelve frames we have one second of movie material,” says chief animator Piotr Dominiak.

Matching each frame to the previous one requires extremely precise work. Patience is a must

“The image is displayed on the canvas by a projector behind me. I can see the main lines and the movement required. I paint the contours to create the movement and then I can sense, from what I see in the live preview, I know whether the stroke of the brush is correct or not, whether the animation will work,” says Anna Kluza, one of the artists on the project.

Initially, the idea was to make a short film. But when the producers realised what a major figure Van Gogh is around the world, they changed their mind.

“I think that there are a lot of people who are fans of Vincent van Gogh, they’re fans of his paintings, they’re interested about his life and quite honestly the reason Hugh (Welchman) originally made the decision that we shouldn’t do this as a short film but as a feature film was because of an exhibition of Van Gogh’s letters in London. There was a queue on a Tuesday afternoon for several hours just to read his letters, which meant that it’s not only about the art that he created, it’s also about him as a person,” says Breakthru Films CEO, Sean Bobbit.

Described as an investigation into the life and controversial death of one of the world’s most beloved painters, as told through his paintings, the characters that inhabit them and through dramatic reconstructions of the events leading up to his death, ‘Loving Vincent’ is expected to be his screens in two years’ time.