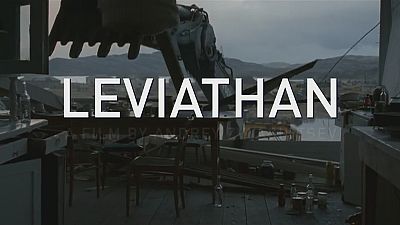 Russian director Andrei Zvyagintsev has picked up international acclaim for his Oscar-nominated film ‘Leviathan’ but the drama is dividing opinion back home.

Filmmaking is about making waves, attracting the attention of those to whom actually we work for - the film goers -especially those who live in Russia.

Produced by Ukrainian-born filmmaker Alexander Rodnyansky, it tells the story of a car mechanic who fights against a corrupt mayor’s plan to evict him from his property.

Euronews spoke to Rodnyansky to find out more about how it is possible for his film to be lauded overseas and denounced at home.

Elena Karaeva, euronews:
Some see Leviathan as a critique of Russia itself, with allegations that it is “Russophobic” and a “vile parody of contemporary Russian morals”. How do you respond to that?

Alexander Rodnyansky:
I think that the discussions taking place in Russia are not just about the film and its artistic qualities. But also about deeper reflection about where Russia is right now, where it is heading and why?

The way I see it and the way the director sees it, the film thanks to its unequaled social realism is an heir to classic Russian culture and literature. Zvyagintsev and his work virtually stand on the shoulders of the giants of Russian literature.

The film has no particular ties to the place it was filmed nor to the actual time it takes place and I suppose that’s one of the reasons why its received such high praise all over the world, in every country it’s been shown, from South Korea and India to the US, France and Britain.

Elena Karaeva, euronews:
So do shared humanistic European values still exist in Russia and are they shared not only by film directors but by Russian cinema as a whole?

Alexander Rodnyansky:
I believe that Russian cinema was and still is very much part of European culture.

Russian cinema was one of the most influential components of European culture.

We are have a history of great screenwriters including Alexander Sokurov, Andrei Zvyagintsev, Pavel Lungine, Alexey Uchitelle (pronounce U-chi-tel), Andrei Konchalovsky and more.

They are all European writers, They not only share the same values as their European peers but they are part of the same production process and produce films in the same studios.

Elena Karaeva, euronews:
Are there any official taboos in Russia in terms of choosing the subjects or themes? And what about self-censorship?

Alexander Rodnyansky:
No, I don’t think there are any official taboos in Russia. But what does exist is self-censorship and there are some good reasons for this phenomenon.

Cinema is becoming more and more commercial; art in cinema is dying out – especially in big budget movies which now dominate.

Those great genres of purely artistic cinema are gone. So I think that self-censorship is due to film-makers’ desire to ensure their work is seen not only by a fraction of the population, but by the wider public.

I would say that the most testing times for art-house cinema is yet to come and the only way to save what can be saved and to find a way out is to turn to the web.

Elena Karaeva, euronews:
Some say that “Leviathan” was made available via the internet with your tacit permission. Is that true?

Alexander Rodnyansky:
I would say our input with regard to this has been greatly exaggerated, to put it mildly.

Elena Karaeva, euronews:
If the Oscar goes to “Leviathan”, what will it mean to you personally? Your greatest achievement or the first of many?

Alexander Rodnyansky:
Putting aside professional recognition by our peers which is always flattering, the award will gives life to the film itself.

Filmmaking is about making waves, attracting the attention of those to whom actually we work for – the film-goers. First and most of all film-goers, especially those who live in Russia.