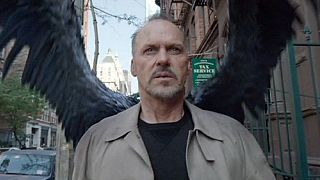 In ‘Birdman’, Michael Keaton plays a washed-up Hollywood actor once famous for his role as a superhero who attempts a comeback on Broadway.

Directed by Alejandro González Iñárritu, the movie is shot in a way that makes it appear almost seamless, a true technical feat and a real challenge for the actors:

Co-starring Edward Norton as an insufferably egotistical Method actor, the film takes off in different directions leaving the audience wondering what is real and what is imagined.

Norton expressed deep respect for Iñárritu: “Filmmakers who are willing to leave people with questions at the end of a movie are fairly rare I think. I think there’s this impulse often to answer everything because it’s safer to send people away feeling that they comprehended everything. Leaving people with questions swirling around inside them is a much more provocative thing to do and I think a much more mature thing to do because I don’t think the ultimate goal of serious art is to make people feel better. I think it’s to sort of question how and why we feel the way we do. I think it’s a very intentionally… there’s a lot of intentional mysteries in this.”

Like many of the Mexican director’s movies, you either love or hate ‘Birdman’, though this one has mostly garnered enthusiasic reviews ranging from "spectacular" to "exhilarating".

Co-starring Zach Galifianakis, Emma Stone and Naomi Watts, ‘Birdman’ has been nominated for seven Golden Globes, including Best Motion Picture, Best Director and Best Actor. It will be on global release from January.