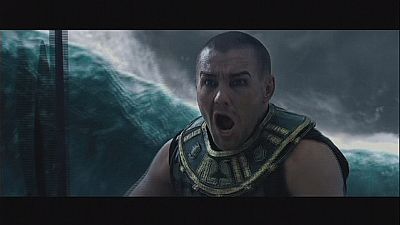 The British actor said he carried out some serious research ahead of the shoot:

“I started by watching ‘Life of Brian’ by Monty Python, which I just love, a fantastic film. You have to watch these things, you know, because you have to know where can you start unintentionally becoming funny in a way that is fantastic for ‘Life of Brian’ but not what we’re looking for here,” he said.

“And then you’ve got a lot of texts, you’ve got an awful lot of people who have a lot of opinions, very strong opinions about how Moses should be played. I listened to all of them and then eventually, guided by Rid, we found our own way.”

‘Breaking Bad’ star Aaron Paul plays the Hebrew slave Joshua who goes on to lead the people into the promised land after Moses.

He said the role came naturally to him: “My father was a southern Baptist minister and so he had us reading the Bible from beginning to end. So I’ve read the book of Exodus multiple times and I knew the story, and when I was asked to play Joshua, it was just sort of a strange out-of-body experience I had.”

Scott has come under fire for casting white actors in the main roles as Egyptians and black actors as slaves. He said he chose a cast that would attract financial backing for this multi-million dollar movie, which relies heavily on special effects for scenes like the biblical splitting of the Red Sea.

“I went back to remembering the tragedy that occurred six, seven years ago. It was the big tsunami. So I start off with the real thing and then the wave returns, and when it returns, everything else is down to brilliant digital animation,” said the director.

Featuring an A-list cast including Ben Kingsley, Sigourney Weaver and John Turturro, ‘Exodus: Gods and Kings’ is on global release from now.