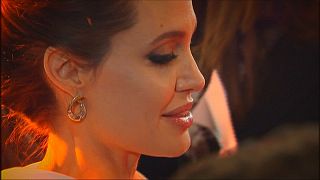 Angelina Jolie was joined by members of the British Armed Forces on the red carpet in London for the premiere of the film “Unbroken” which she directed.

The movie is a tale of lost athletic promise stolen by events of history, a story of immense courage, of pain and suffering and a life subsequently touched by the power of God.

Louie Zamperini was a potential world athletics champion and Olympic Gold medallist instead his life was defined by his time as a Japanese prisoner of war. He died earlier this year aged 97.

“It was challenging but it also made it a very deep, wonderful experience because we got to meet this extraordinary man and we all became dear friends with him and he guided us through every moment of the film. Where we wouldn’t be sure about a scene or a raft or a moment or a character and he had such an extraordinary memory,” Angelina Jolie told reporters.

Zamperini’s plane was shot down during a bombing raid. Eight of the 11 crew members died. The survivors drifted for 47 days before being captured and tortured by the Japanese until release at the end of the Second World War. As director Angelina Jolie set high standards on the shoot.

“I remember her saying to me at the beginning of this project she wanted the best of both of us and once she said that to me I really knew I had to buck my ideas up early. And if you have got someone of Angelina Jolie’s calibre promising you her best then the pressure’s on so I really couldn’t fall short and I am really hopeful that we didn’t,” explained English actor Jack O’Connell

The movie is an adaptation of the book, “Unbroken: A World War II Story of Survival, Resilience and Redemption,” by American writer Laura Hillenbrand. The screenplay was written by Joel and Ethan Coen.