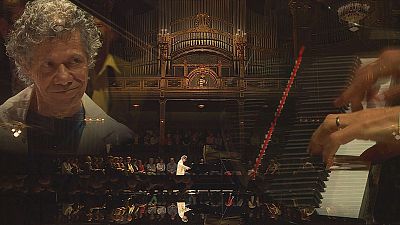 He has been on the crest of a “jazz wave” for decades now. An adventurer in music, exploring all the genres, he’s even invented one or two Chick Corea has been performing on his world tour for months now.

‘Musica’ met this immense improviser and musician in Budapest, where he played solo in front of an enthusiastic audience.

“Years ago it became apparent to me that music is a social thing, I mean, you can play for yourself and by yourself, there’s nothing bad about that, it can be fun too, but really music is something that we exchange to bring pleasure, to sing and to dance, to be light about life, to somehow bring the spirits up in one way or the other… and so I like to try to cause that effect, every place I go it’s a goal of mine,” he says.

Budapest, with its Central European flavour, boasts a remarkable musical tradition, of which the Liszt Academy is the perfect illustration. Recently restored, it has regained its historic splendour.

“This concert is symbolic, because we shouldn’t forget that Franz Liszt, whom the Music Academy is named after, was the first in the history of music who gave a solo concert, a recital, in Rome in 1839. He invented the genre! Tonight Chick Corea symbolically made an appointment with Franz Liszt!” says the Academy’s Imre Szabo Stein.

“I agree that there should be more art and more culture,” says Corea, “but creativity is within us, each individual owns it, and it’s a matter of taking responsibility to do it, to push it through so as to make it happen. Things won’t happen with laws and bureaucracy, things will happen with individuals creating and doing things.”

Paying tribute to one of Hungary’s greatest composers, who also performed at the Liszt Academy, is almost a homecoming for this Massachusetts son.

“Béla Bartok was the first classical composer that I got interested in when I was in high school,” he rapped to the Budapest audience between pieces. “I practiced to Bach and Mozart but I wasn’t so interested in them at that time… they are nice but… Bartok, wow!” he enthused.

“I like to keep playing, (Corea is 72), because that’s my life and I think it’s the best thing that I have to offer to people and to my environment: my music!”