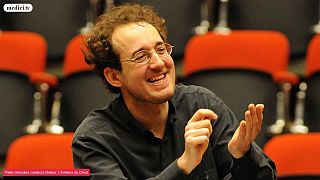 L’Enfance du Christ (The Childhood of Christ) is one of the most fascinating works by Berlioz. Initially presented by the same author as the recovery of a work by a Baroque composer, it is based on the journey of the Holy Family, as narrated by the evangelist Matthew. With a libretto written by the composer himself, it was premiered in Paris in 1854. The oratorio focuses on the figure of Herod, the murder of all new-borns in Judea, and on the escape and exile of the Holy Family in Egypt; the ending focuses on the arrival of the Holy Family at Sais, where they are hosted by a group of Ishmaelites.

Despite not displaying a very strict religious fervour, Berlioz was a great lover of religious choral music. The origin of this love dates back to 1850, when he composed a piece for organ for his friend and instrumentalist Joseph-Louis Duc, called L’Adieu des Bergers (The Shepherds’ Farewell), which later became a choral piece, in which the shepherds say goodbye to baby Jesus. Later, he added fragments to this chorus for tenor and some orchestral sections, such as the Overture La fuite en Egypte (The Flight into Egypt). Although most of his music had been greeted rather negatively for its formal risk and an aesthetic approaching that of Wagner, L’Enfance du Christ quickly became a success. The chorus numbers contribute to this, with melodies that seem to go on forever, of a captivating beauty and goodness.