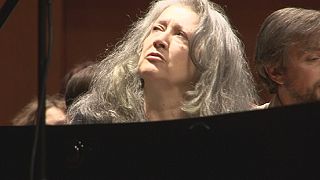 Catch her while you can. Elusive, unapproachable,  Martha Argerich is one of the world’s greatest pianists.

“I find the musicians sensational, from every point of view musically”, she says. “And also their spirit… extraordinary!”

Martha Argerich has made Schumann’s Concerto one of her signature pieces, and it is much appreciated by the Roman audience.

Fiercely independent, allergic to the rules imposed by career, fame, agents and concert halls, Martha does not interpret music, she embodies it.

“It’s impossible to separate the person from the musician – she is music. First of all, what a dynamo! Despite all the energy and mercuriality she has in her playing she manages to get every nuance along the way – which very few pianists can do.

Prodigious technique, uncanny musicality, and a hypersensitivity means that when Martha talks about Schumann’s fate it feels like she is talking about herself.

“I’m extremely touched by his suffering”, she says, “and I love his generosity, even with his colleagues. He had so much love to give, to everyone, like Chopin, for example, but it was not reciprocal.”

For Martha music makes sense only when shared; unbowed and fearless, she has struggled against solitude all her life.

“Friedrich Gulda, who taught me so much, once told me: ‘You have to learn everything before turning sixteen because later one gets a little stupid!’

When I was seventeen I lived like a forty-year old. I wanted to have the life of a young student, other people of my age were free, had fun, had no stage fright. I found that my life was sad. I’d travel a lot, on my own. I was very shy, I still am because I think that you stay shy. Today, it’s true, I have friends everywhere, and they look after me,” she smiles.

Of course, that shyness disappears as soon as Martha sits at a piano says Antonio Pappano:

“You don’t have to know anything about music to be absolutely affected, and infected, by the spirit of her music-making. You’re just knocked over by the amount of energy that she has, but actually what she does is always extremely natural, it’s as if the music can’t go any other way.”

Now over 70, Martha Argerich continues to play in the eye of her own artistic storm, and the public continues to be willingly swept along.