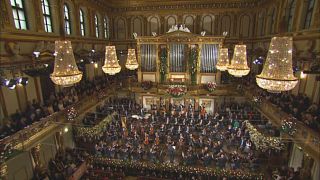 The New Year’s Day concert by the Vienna Philharmonic Orchestra has become a part of New Year celebrations.

Not everyone knows though that in this top orchestra, know-how, custom and experience are handed down from generation to generation, often within the same family, just like a workshop in Renaissance times, when the elders would pass their skills on to the youngsters.

The Tomböck clan; father, son and grandson are far from being a common-or-garden family.

Wolfgang Tomböck Jr told euronews: “I remember as a very small child playing with my brother under the pianoforte and my mother was playing Chopin or Schubert, and she always asked: ‘Is it too loud for you’?” He laughed and added: “We were playing with our Matchbox cars… ‘No, no, it’s ok’.”

Wolfgang Sr told us: “My grandson came to my house for many years; I accompanied him on the piano when he was playing his sonatas and concertos; he came four or five times a week to my house. And today the result is highly satisfying.”

So is it an honour or a major responsibility to be a third generation musician in the VPO?

Grandson Johannes Tomböck said: “I think my father never put pressure on me to enter this orchestra, but my personal pressure was very strong because every relative in my family is in the Vienna Philharmonic! I thought: ‘If I want to be a musician the only way to do it is by entering this orchestra!’”

Ernst Ottensamer is first clarinet in the VPO, and his two sons have followed suit: Andreas as solo clarinet with the Berlin Philharmonic, and Daniel following father in Vienna. The pair were brought up surrounded by music.

Ernst told us: “We tried to give them a love of music, without forcing them, and they accepted that easily. This may be our merit: you cannot be a good musician with forcing and stress, this will not open your heart, and music is not in the brain but more in the heart.”

Daniel Ottensamer explained what a musician father can hand down to his musician son.

“For example how to react when a conductor says something, or how (much I should play like a soloist) in the orchestra: you always practice at home, but then you have to work with the whole orchestra, and you just have to discover ‘what’s my role, and when to play more or just hold back’.”

He went on: “Of course he was always there when I needed some advice, that made it really a lot easier for me to manage all the new things – it was a really good collaboration!”

In this story there are excerpts from the following works: