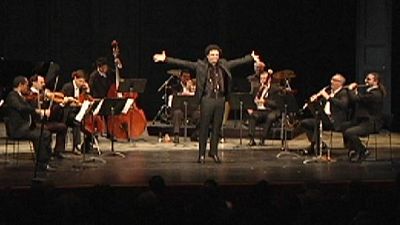 Rolando Villazón, one of the greatest tenors of the decade, has embarked on a new musical adventure.

He is celebrating his love for Mexico through the traditional songs he grew up with; singing his childhood Mexican melodies that have been with him for much longer than the arias that turned him into an opera star.

“I sing this music because it’s branded on my heart, in the same way as Verdi, or Donizetti; when I sing ‘Una furtiva lagrima’ I do it with the same passion, the same dedication, the same depth with which today I sing some of the greatest Mexican hits of all times. “

2010 marks the bicentenary of Mexico’s independence and 100 years since its revolution, a further reason to evoke the flavours and atmosphere of his country accompanied by the  Bolivar Soloists.

As a young man Villazón wanted to join the clergy, or so the legend goes. Life turned out to be quite different although he says the search for a spiritual dimension is equally important for an artist as a priest.

“I think there’s always some mystical element in being an artist, a sort of search for the absolutes, which doesn’t have to be God. It’s rather like reaching out for that human essence, that internal cry we all have inside. And that essence could be universal, the reason why we are here. And it doesn’t mean providing the answer. It’s simply giving shape to that question.“

However exuberant or extrovert or elated Rolando Villazón may be he is someone who seriously ponders the human condition.

“The Mexican writer Carlos Fuentes once said: ‘the struggle for freedom is freedom.’ I think that as human beings we struggle to be free, although we are clearly defined by various factors – cultural, psychological, biological, genetic and more. So Man struggles and I think that his hardest struggle is trying to find out how he’s defined, and how he can find freedom despite being defined. In that sense, if struggling for freedom is being free, then yes, I’m a free man.“

Les Grandes Voix – Céleste Productions are among the organisers of the European tour.